Wireless headphones may be the craze these days, but manufacturers are still producing plenty of wired headphones, and for good reason. Wired headphones sound better than their cord-free counterparts, don't require any fiddly pairing, and most importantly, never need to be charged. V-Moda, makers of some of my favorite headphones I've tested to date, has decided to jump into the in-ear headphone game with their own line of fitness oriented headphones and I've spent the last few weeks testing them out.

The new Forza series of in-ear headphones consists of three different models, two wired, and one wireless. The Forza Metallo Wireless ($170) won't be available until January, so today we'll only be looking at the two wired options, the Forza ($100) and Forza Metallo ($130). Both boast a nearly identical spec list, with the only real differentiation being materials and price. 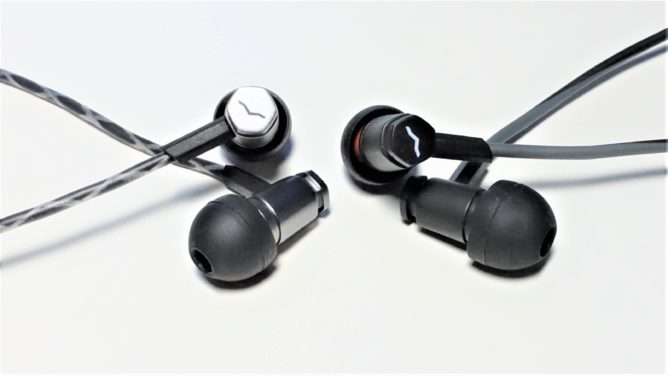 Forza Metallos on the left, standard Forzas on the right.

Each sports 5.8mm drivers, High-Res audio, 45 degree gold-plated 3.5mm plugs, sweat and weather resistance, in-line three-button controls and mic, and tangle-resistant Kevlar reinforced cords. The accessory list for both headphones is also the same, each including four sizes of buds, three sizes of fins, a set of ear-hooks, and a carry pouch. 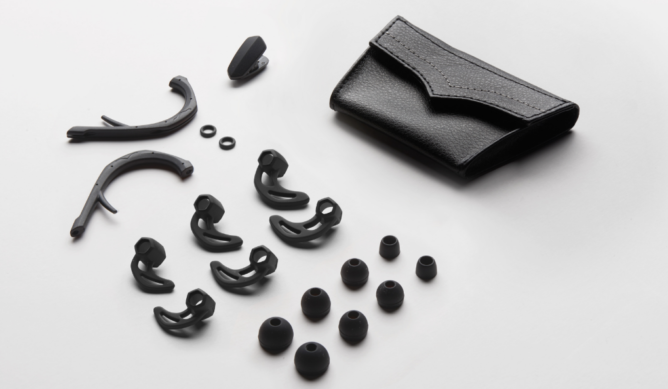 Both models come with the same accessories, the only difference is the carry-case.

The Metalos justify their $30 higher asking price by upgrading the housing from plastic to metal, and the carry-pouch is also crafted from vegan leather (AKA, polyurethane) instead of nylon mesh. Other than those, mostly cosmetic, differences, the headphones are practically identical. Because of that, I'm going to review them collectively instead of individually.

The Forza's design definitely fits within the design language of V-Moda's headphone line. Sharp angles, stark colors, and lots of v-shapes make these easily identifiable as horses from the Italian company's stable. The unadorned headphones look a bit dull, but they feature a modular design that allows their user to customize both their look and fit. 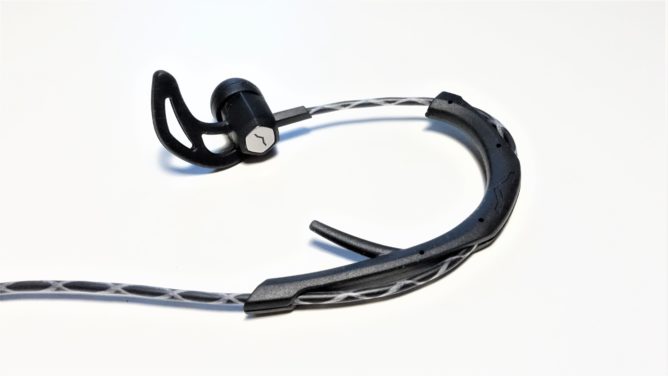 They come with more fins and hooks than a fishing boat.

The ear hooks and fins both can be added for a more secure fit and sportier look. Special end-caps – akin to the shields available for the Crossfades – can also be fit over the backs of the buds to enhance their look. They are available in both 3-D printed plastic and precious metals (which are obscenely expensive). V-Moda sent me a couple sets to check out. While I thought the plates for the V-Moda Crossfades were awesome, I was underwhelmed by the ear caps. They aren't bad looking, but they feel a bit cheap and look funny protruding from my ears. 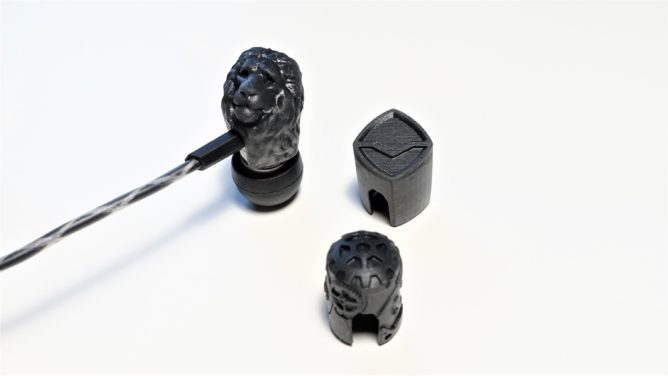 Cool looking, but not very practical.

They also come with a major drawback. You can have the caps on the buds, or the fins, but not both at the same time. That's a drag, because the fins are so excellent that I can't imagine wearing the headphones without them attached. The precious metal caps look considerably nicer, and maybe some female consumers would like to use them, but they just aren't my style. 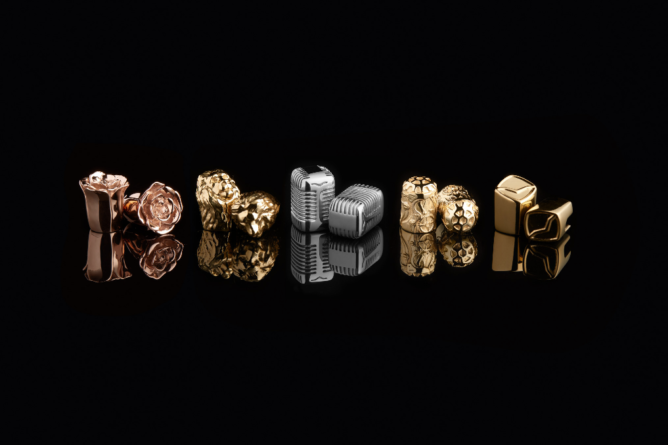 These all cost considerably more than the headphones themselves.

The in-line controls work as expected with nice, clicky, feedback. The cables are advertised as tangle-resistant, and I can attest to the truthfulness of that assertion. They are remarkably hard to snarl, even when you just shove them in their carry-case or a pocket haphazardly. It may be a small thing, but man, it is nice not having to remove knots from the headphones every time I want to use them. 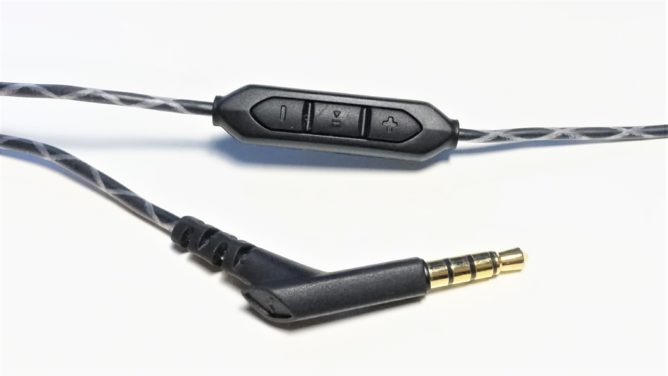 I do love an angled headphone plug.

I'm not going to mince words here. These are the best fitting in-ear headphones I've ever used. The small profile of the buds and comfortable tips are great, but it's those fins that make the real difference. V-Moda boasts on their website that they spent two years refining the fit of these headphones and it shows. 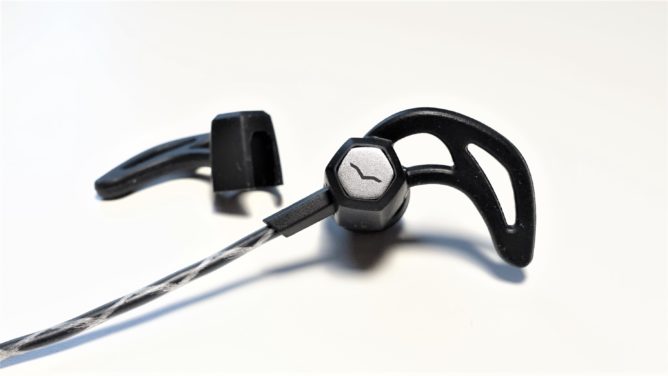 The light weight of the bodies paired with the fins that have just the perfect amount of flex and grip makes for the most effortlessly secure fit I've experienced with in-ear headphones. Both the fins and buds are easy to exchange and are conveniently marked making it simple to find the correct pairs.

The ear hooks provide even more stability when engaging in an intense activity, but are made of a hard plastic instead of the soft silicone that the ear fins are constructed from. The fins and ear tips caused no fatigue, I could wear them indefinitely, but the ear hooks I could only tolerate for 30-45 minutes at a time as they dug into the backs of my ears. They are also a pain to attach to the cords. I eventually just put the hooks back in the box and looped the cord over my ears without them while working out for added stability. That worked just fine and I didn't miss them at all.

These little buds can crank out some nice sound (I say that about both of them, because they sound nearly identical). The warm sound profile of the Forzas pushes the low-end enough to satisfy bass heads but may alienate listeners craving a more balanced approach. The additional bass comes with a small sacrifice in clarity and detail, though not enough to be distracting. Those who prefer a little extra oomph to their music will likely be content with the trade-off.

The sound space is remarkably open for a pair of in-ear buds. Open enough to almost fool my ears into thinking that they are listening to on-ear headphones. Once again, I attribute this to the headphones small, unobtrusive bodies, and superb fit.

There is, however, a caveat with the Forza's excellent fit. These headphones suffer from a significant amount of cable noise. They feel great, and stay put in my ears when I'm in motion, but even the smallest movements lead to rustling and thumping sounds as vibrations carry through the wires. It may be due to the material used to strengthen the cords, or perhaps some other factor, the bottom line is they are much noisier than other headphones I have used. 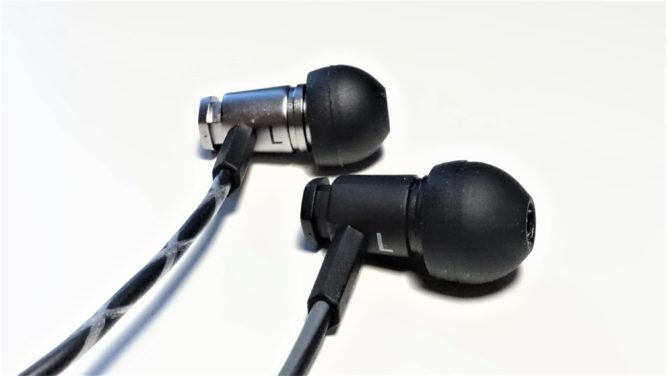 Cables should be seen, not heard.

The good news is that noise can be greatly reduced by using the included ear-hooks and shirt-clip. Even just looping the wires over your ears without the hooks attached really helps in this regard. Your other option is to not move around very much while using the Forzas, but that kinda defeats their purpose as fitness-oriented buds.

The Forzas aren't noise canceling, but the secure fit does help block some ambient noise. As has been the case with every pair of V-Modas I've tried, these guys can get plenty loud. I wouldn't recommend listening to them at maximum volume, but if you did, you would find that sound remains crisp and clean even at their sonic peak.

Ruggedness, modularity, incredible fit, and above average sound are all wins for these headphones. As a complete package, they really are some of the best in-ear buds I've used, and I would readily recommend them to anyone. The only real issue I found with them is cable noise, but as I've already explained, that is easy to work around. It also wouldn't hurt if they were a little cheaper. That being said, a price range of $100-$130, while expensive, is not unheard of for a pair of in-ear wired buds from a respected brand. 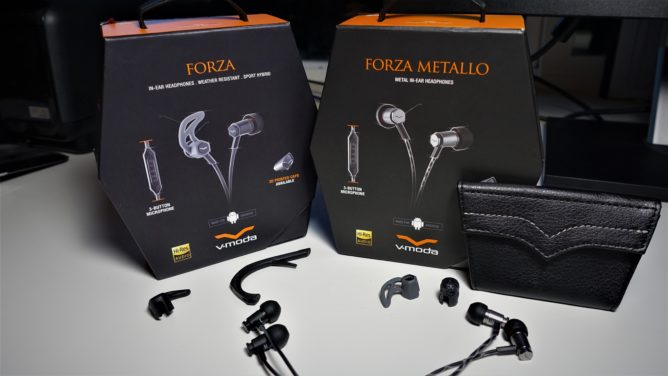 V-Moda also knows how to make a good looking box.

If you'd like to try a pair for yourself you can find them at Amazon and V-Moda's own website. The Forzas are available in black, orange/black, and white. The Forza Metallos are offered in rose gold/white and silver/black. Questions? You know where to put them – I'll answer any you pose. Also, I'm hoping to get a review unit of the wireless version of these headphones soon, so keep an eye out for my review.