NVIDIA's yearly CES bash just wrapped up, and once again there's a new SHIELD coming for gamers. Well, "new" in a very limited sense. The new version of the Android TV-powered set top box looks nearly identical to the SHIELD TV that's been available since the summer of 2015. It's 40% smaller than the original - closer in size to competitors like Roku - but inside is the same Tegra X1 system that we're familiar with. (Which is still some of the most powerful "mobile" silicon around.) The big change, as hinted by the leak last month, is in the controller.

In addition to a spiffy new angular, low-poly shell, the controller is designed with hands-free voice control in mind. That means that it'll be able to use Google Assistant with an "OK Google" voice command, no button presses required. That's an interesting proposition... but keep in mind that Assistant isn't actually ready for Android TV now. Users will have to wait for the software to be ready for the SHIELD, and NVIDIA's connected home gadget, to work with Google's new voice control platform. The remote, which is now included with both models, works hands-free as well. 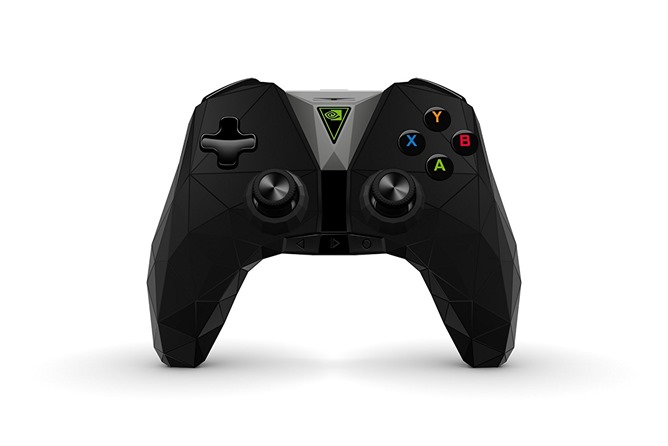 Oh yes, the connected home stuff. The SHIELD SPOT is a separate product, a tiny Wi-Fi enabled controller that can connect with gadgets like Google's own Nest thermostat, and has microphones that can use Google Assistant for easy access at multiple spots (get it?) throughout the home. NVIDIA doesn't have a whole lot to say about it at the moment, but it will be controlled from the SHIELD TV via voice commands, and it's "coming soon."

Aside from the included remote and controller and the smaller size, the new SHIELD appears to be using the exact same hardware as the previous model. That means a Tegra X1 processor, 3GB of RAM, and either 16GB of storage or 500GB on the SHIELD Pro. (The new SHIELD Pro looks like it's using the older, larger body to accommodate that 2.5" laptop-grade hard drive.) Other ports include standard HDMI (4K and HDR support included), gigabit Ethernet, two standard USB 3.0 ports, and a MicroSD card slot. There's also an IR input for compatibility with Logitech Harmony remotes, but the remote and controllers also have IR blasters now. Not to control the SHIELD (that's through Bluetooth and/or Wi-Fi direct), but to control external equipment like TVs and speakers. Nice. All of it will be running Android 7.0.

The new SHIELD will go on sale later this month - January 16th, according the Amazon listings for the SHIELD and SHIELD Pro. The basic 16GB version is $199.99, while the 500GB Pro model is $299.99, the same price as the current models. All the features of the new SHIELD will be back-ported to the old SHIELD, as is NVIDIA's custom, though customers will have to buy a new remote or controller to get hands-free voice commands and IR blaster functionality.

Sporting a sleek, new design and now shipping with both a remote and a game controller, SHIELD provides the best, most complete entertainment experience in the living room.

"NVIDIA's rich heritage in visual computing and deep learning has enabled us to create this revolutionary device," said Jen-Hsun Huang, founder and chief executive officer of NVIDIA, who revealed SHIELD during his opening keynote address at CES.

"SHIELD TV is the world's most advanced streamer. Its brilliant 4K HDR quality, hallmark NVIDIA gaming performance and broad access to media content will bring families hours of joy. And with SHIELD's new AI home capability, we can control and interact with content through the magic of artificial intelligence from anywhere in the house," he said.

Highest Performance, 4K HDR Media Streamer
The new SHIELD delivers the richest visual experience with support for 4K HDR and 3x the performance of any other streamer on the market. With the addition of Amazon Video in 4K HDR, SHIELD offers the largest, most open catalog of media in stunning 4K -- also supporting Netflix, YouTube, Google Play Movies(1) and VUDU.

Amazing Games
SHIELD TV stands alone among media streamers, with the widest range of gaming capabilities and richest assortment of game content. Its library of games has been expanded to thousands of titles, with the ability coming soon to stream Ubisoft's catalog of hits, including Watch Dogs 2, Assassin's Creed Syndicate, For Honor and countless others. New Ubisoft games will also be available, simultaneous with their PC release.

SHIELD continues to add hit franchises to the platform natively. Upcoming games include The Witness, Tomb Raider and Shadowgun Legends.

AI in the Home
In the coming months, SHIELD TV will be expanded with a series of AI capabilities that transforms home entertainment:

Support for SHIELD
"We're excited to be part of the new SHIELD TV, powered by the Android TV platform," said Sascha Prueter, director of Android TV at Google. "When the Google Assistant comes to Android TV in the coming months, SHIELD users will be able to enjoy a hands-free Android TV experience through 'Ok Google' voice commands."

Pricing and Availability
SHIELD TV is available for pre-order now and will ship in the United States, Canada and select European regions later this month for $199.99, including controller and remote. SHIELD Pro will also be available later this month with controller, remote with headset jack and 500GB of storage. A separate version of SHIELD, with custom software optimized for China, will be available later this year. The NVIDIA SPOT mic accessory for SHIELD will sell for $49.99.

Features(2) announced for the new SHIELD TV will come to current SHIELD devices through an over-the-air software upgrade, available in January.

More information is available at https://www.nvidia.com/en-us/shield/.

LG knows that people are not interested in modular phones, so it will shift future focus to ...