The face detection feature in Google Photos is exceptionally good at picking people out of crowds and identifying known faces in very low resolution pictures. There are even some pretty killer algorithms for selecting pictures to use in collages and animations, but when it comes to choosing cover photos for those detected faces, it's not always perfect. Fortunately, Google Photos now allows users to select a different "feature photo" for contacts in face detection. 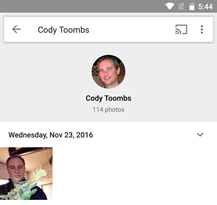 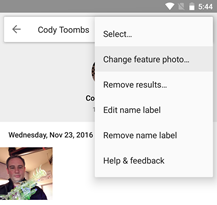 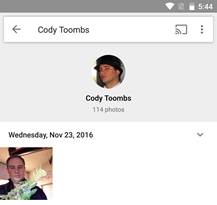 To make a trade, just tap on one of the thumbnails in the list of detected faces (tap the search bar to get there quickly), then hit the overflow menu and look for the "Change feature photo" command. You'll see a photo picker with all of the images containing the person. Choose one and you're done. The resulting thumbnail will be automatically centered on the identified face.

Changing featured photos was technically added around the release of v2.0 in September, but only in the iOS version. (Yeah, I know, heresy.) Strangely, it was left out of several subsequent releases for Android. A few tests seems to show that it didn't work on anything below the v2.5 release in early December. Even when that version came out, the menu option didn't show up when we checked for new features. It was likely enabled with a server-side switch sometime in December, or maybe even in the last few days. Of course, some users may have had it for a few weeks while others are only just now seeing it.

Version 2.6 is already a couple of weeks old, but if it hasn't gone into wide release for everybody yet, it can be downloaded at APK Mirror.