Back in November, Samsung started beta testing the Nougat update for the Galaxy S7 and S7 Edge. Since then, it has rolled out several updates to squash bugs and answer feedback, but it looks like the beta test is now over. The team posted a notice to those who were participating in the beta program saying that it will end on December 30 at 24:00 (so December 31 at 00:00). 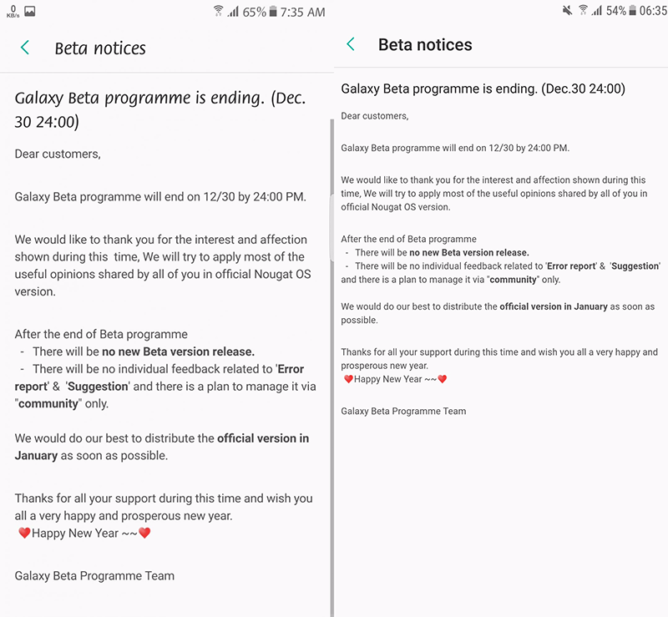 The notice was spotted by several users so it seems that the program is wrapping up for everyone. Perhaps the most exciting piece of news in that message though is the line saying, "We would do our best to distribute the official version in January as soon as possible." So it looks like we're approaching the official release of Nougat for everyone, not just beta testers who happen to live in specific countries.

The phrasing of the sentence is not a tangible promise, but it's something to hold on to. And sure, there will be delays because of operators and different rates of rollouts per country, but this is good news nonetheless, especially since it looks like Samsung will roll out Android 7.1 directly and not 7.0.

My Nexus 5X testing device has had Nougat since the first dev preview and my fiancé has been enjoying a taste of Nougat on his LG G5 for several weeks. To say that I was feeling left out with my S7 Edge is an understatement, so I'm very excited that the release date is approaching.

NBC's Breaking News app and service will shut down tomorrow