Levitating speakers are the novelty item of the past couple of years. You can find a new one on Kickstarter every month or so and Amazon has a collection of them for sale, some of which are shaped like the Death Star for an added cool effect. The magic, if you consider it that, is due to electromagnets that keep the speaker hanging in mid-air above its main station and without it falling.

At CES, LG will show off its own take on the levitating speaker: the PJ9. The announcement article isn't very clear on some details, but it lets us know that the PJ9 will have a battery that lasts 10 hours after which the speaker will drop down to charge wirelessly. It's also IPX7 rated for outdoor use, and supports MultiPoint technology to connect to two Bluetooth devices simultaneously. 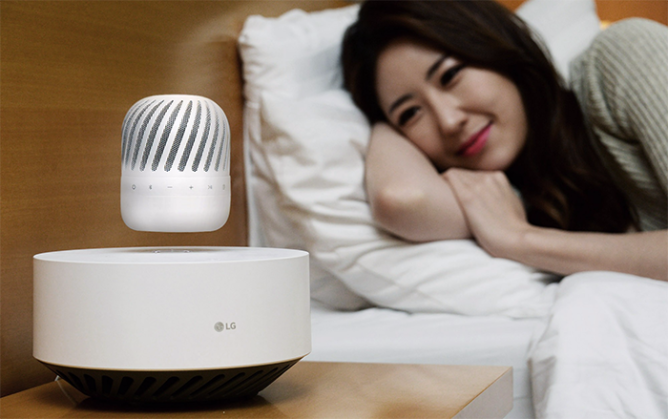 As for the sound specs, the PJ9 houses a "360 degree omnidirectional speaker with turbine blade-inspired design and deep bass courtesy of the subwoofer embedded inside the Levitation Station" as well as "Dual Passive Radiator technology to reproduce flush mid-range tones and crisp highs."

There are no pricing or release date details, and no specifics as to whether the levitating speaker part can be completely removed and used away from the base or if the PJ9 has WiFi connectivity for more than Bluetooth streaming. All we know is that the PJ9 will be shown off at LG's booth during CES 2017 next week.