"David, this is Android Police" - I know, I know. But AirPods are probably the most hyped consumer electronic of the holiday season in 2016, and even if they don't work [fully] with Android phones, they are doubtless going to be imitated and iterated upon by tons of other companies in 2017. So, soon enough, we will be seeing Android AirPods competitors. Maybe even from Google (I have no knowledge of this, so please, do not let the rumor train out of the station). Because of this, I think the conversation iFixIt is encouraging around these products is fascinating to consider, and the AirPods are as good a place as any to start.

iFixIt's beef with Apple's new personal audio gadget centers around three basic critiques: AirPods aren't especially well-made in some regards, they are functionally impossible to repair (even to replace a battery), and there is no way anyone will attempt to recycle them. These headphones, as a reminder, cost $160.

To point one, iFixIt heads to the X-ray machine, where it finds extensive evidence of "voiding" in the solder of the headphones' primary chipset. iFixIt claims this is probably evidence of low quality standards in production and possible of a rushed product release. Given AirPods' release delay, this seems far from implausible. While solder voids are not necessarily in and of themselves a problem, iFixIt's underlying message is that it just doesn't know the kind of attention to high manufacturing standards one would expect from Apple.

The second major criticism comes in repairability. iFixIt rates the AirPods as a zero out of ten - functionally unrepairable. This is because you literally have to destroy the AirPod casing to access the internals, which are themselves variously taped, glued, and welded together into, well, let me just give iFixIt the mic for a moment:

As we begin to pull out the boards, cables, and other bits, we're reminded of a certain wearable repair nightmare. If jamming complex components into a small form factor and sealing it with a copious amount of glue were a game, Apple would be winning... What remains in the earbud is a hot mess of cables and adhesive, and none of it seems particularly keen on coming out. So we turn to the stem, hoping for another entry point. Instead, we encounter a waterfall of glue...

Accessing any case component is impossible without destroying the outer casing, earning the AirPods a nigh-unprecedented 0/10 on our repairability scale.

In the end, iFixIt discovers the only way to fully disassemble an AirPod and physically extract its components is to literally cut it open with a knife. Nice. 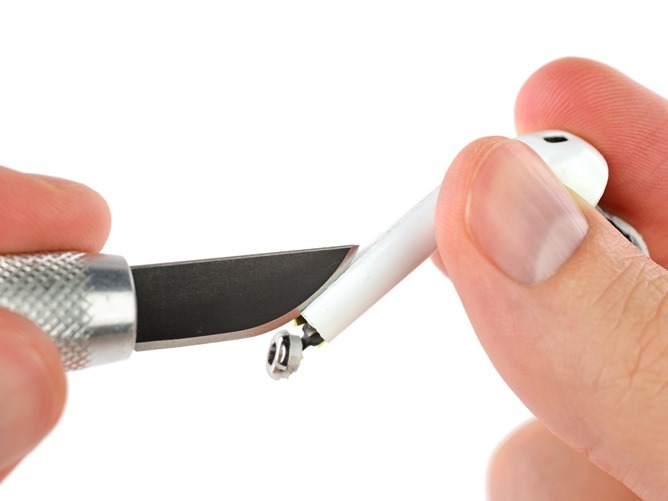 The second point, in turn, leads to the third: iFixIt says the way AirPods are put together makes them essentially worthless to recyclers. This means their most likely final resting place will not be an eWaste facility, but just a straight up landfill:

When products are glued shut and soldered together, like the AirPods, it costs recyclers more than they can earn from recovered materials. If AirPods are Apple’s new standard earbud, they'll sell hundreds of millions of them. That’s millions of AirPods that are, essentially, disposable.

This is... not good. iFixIt's point about recyclability is perhaps the most damning for Apple, a company that has gone so far as to build a literal robot to tear apart and recycle smartphones. Unless Apple opts to eat the cost of recycling AirPods in some way or create its own recycling program for them, independent recyclers will have no reason to take them, because they'll be less than worthless.

I have to admit, I'd never really considered the problems wireless earbuds pose in this way. Because so many complex electronics and other components have to be crammed into such a small area, concerns about repairability and sustainability essentially go out the window. Without a mess of glue, tape, and a casing so perfectly wrapped around it all that you literally have to destroy it to remove it, something like the AirPods probably wouldn't be possible right now. And I'm sure such concerns are just as real for many other wireless earbud designs out there, even the ones that still do use some wiring.

As cool as truly wireless earbuds are, and I'm right there with everyone on that point, it seems that their tiny size and immense complexity provide practical, environmental, and economic challenges that far exceed their much simpler wired predecessors. I also just really felt that, in the slow news week that always tends to precede Christmas here in the US, this was a fascinating look at a fascinating product.

HTC wants 'U' to know about its January 12th announcement