Over two months ago, Samsung stopped production of the Galaxy Note7 permanently. Recalls ensued across the globe, and returns have exceeded 90% of devices sold. Today, if a report from app research firm Apteligent is to be believed, that still means there are more Galaxy Note7s out there in use than there are LG V20s. A lot more. Apteligent's report suggests that there remain well over twice as many Note7s out in the wild as there are LG V20s. The Moto Z just barely comes in above the Note7, too, and according to Apteligent is actually declining in popularity, which is a bit weird. 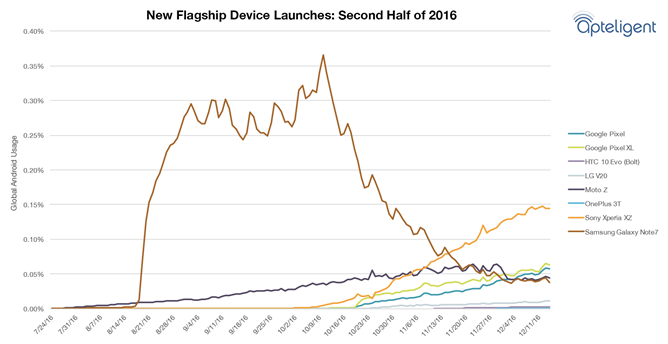 Apteligent's reporting relies on devices "checking in" with the company's analytics, so these remaining Note7 devices are very much in use. And such people are definitely out there - you need go no further than this subreddit, where people are actively discussing how to avoid Samsung's bricking OTA. Lovely.

While this has to be irksome for Samsung, it's definitely a little sad for LG, whose V20 had been positioned as a device with few similarly-sized competitors on the market. I guess the V20 just didn't take off - Apteligent's chart makes it clear the handset is seeing pretty much no momentum these days, sitting well below the Moto Z and Google's Pixel and Pixel XL. The chart claims, rather oddly, that Sony's Xperia XZ is doing quite well, though - maybe things at Sony's mobile division are starting to turn around a bit.

There is an asterisk to all of this, however. While I can't find a definitive list, I do know the LG V20 is sold in a somewhat more limited number of countries than the Note7 was (the V20 never went on sale in Europe, for example). So, it's not quite apples to apples here, but when over 90% of your competitor's product has been taken out of the hands of users and your product still represents just a fraction of the remaining 10%, that's not a good look.

This is very likely NVIDIA's 2017 refresh of the SHIELD Android TV, which may come in two sizes