If you've never heard of Meizu, that's forgivable: it's a largely mainland Chinese smartphone manufacturer that has been producing Android devices for quite some time now. While fairly popular in China, their handsets have seen little traction elsewhere, primarily because Meizu really didn't bother to sell them anywhere else. Well, until recently: Meizu now is attempting to enter the European market with its phones, including the UK (and outside the EU, in Brazil, India, Israel, and New Zealand). This follows vendors like Huawei and Oppo, who have seen increasing success in Europe, a region where Apple is far less dominant.

Meizu, though, is an anomaly. The company is not a "Google Mobile Services" partner, meaning it has no permission to distribute Google's suite of Android apps that are often seen as the proverbial carrot to the stick of keeping Android manufacturers' software "compatible" under Google's definition. For Meizu, this means no Play Store, no Google Play Services, no Google app, no Gmail, no Chrome - just whatever is available in AOSP and then the stuff Meizu decides to pile on. Except, in any practical sense, it doesn't. Getting the full suite of Google applications on a Meizu phone is actually rather easy, and Meizu facilitates the process.

After setting up your GMS-less Meizu phone, just open up Meizu's "hot apps" portal, and you'll see prominently displayed in a featured area the familiar "G" logo for a Google installer app. It almost looks, dare I say, official. Download and run it, and the app then will install the necessary framework and services APKs for GMS, and then the Play Store. From there, you're off to the races: just sign in and poof! Your non-GMS phone is now quite GMS-y indeed. And if you're impatient, you can also just download all of Google's apps from Meizu's app store instead. This all smacks of the notorious old Android fork, Aliyun - minus the outright piracy part. We discovered no cracked or pirated paid apps on Meizu's store.

(It should be noted: Meizu's own PR directed us to go through this process with review units when we asked about GMS compatibility, to which Meizu responded that GMS is "optional" for users. "Optional" is certainly an interesting way to put it.) 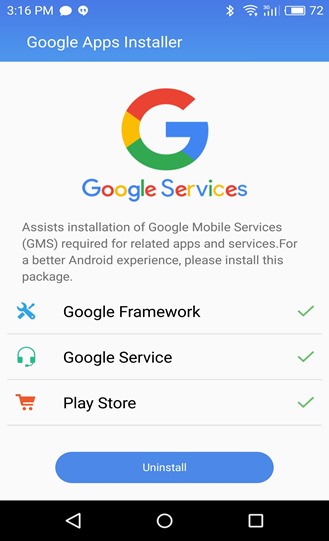 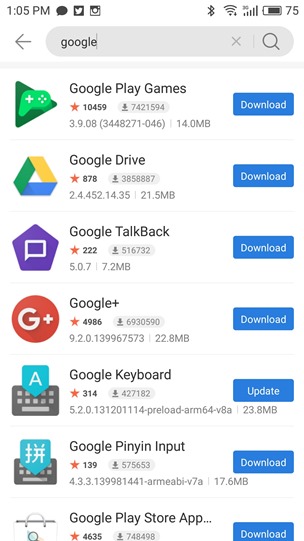 Why do it this way? Well, simply put, preloading Google Mobile Services on a smartphone requires working with Google. Most importantly, that means signing a MADA (Mobile Application Distribution Agreement) and passing the CTS (Compatibility Test Suite). There are some costs associated with this, but they're ones that would be easy for a firm of Meizu's size to bear, and it's something that other domestic Chinese vendors like Oppo and Xiaomi have chosen to do with their handsets sold outside China. So, why hasn't Meizu?

Well, our hypothesis - and it's just that, a guess - is that Meizu's Flyme OS, a very heavily modified version of Android, may not actually be a compatible fork of the operating system. We haven't explicitly confirmed this, but given the level of changes Meizu has made to the OS, it's far from hard to believe and, really, there's not any other especially good reason Meizu wouldn't become a GMS partner. As I said, the costs are limited, and the bar to entry is low enough that even a relatively small vendor like Blu has no trouble passing CTS. And it's clear Meizu knows its users want the Google apps suite, featuring the GMS installer prominently in their app store. (To be clear, the installer is not sanctioned by Google - the only official GMS distribution method Google uses is pre-installation by GMS partners. While Google does not actively seek out those who install GMS after the fact, it would certainly be against the rules for a GMS partner to do this.)

This poses a problem for Google. If a Chinese manufacturer is hard-headed enough to carve a path to adding Google Mobile Services to their customers' non-GMS phones, will there be more such companies that emulate this approach? Could Google lose control of the GMS distribution model? While that seems highly unlikely - Google would almost certainly seek to enjoin such behavior with all the legal tools at is disposal were it to become widespread - Meizu is clearly testing the waters here. This is not to mention the myriad practical issues that come with an unofficial GMS distribution model: Google isn't developing Play Services or its other apps with Meizu's phones in mind, and those apps and services could have compatibility issues with Meizu's phones that users will then blame on Google (one of our own Meizu review handsets is experiencing the classic Play Services battery drain issue already). Or what if one of the Google apps Meizu distributes on its store were to be compromised with malware? A Google product being associated with malicious software, even on a small scale, could generate major headlines.

The fact that Google hasn't taken action or even denounced Meizu may be telling. Perhaps the two are attempting to come to terms and bring Meizu into the GMS fold. Or maybe Meizu simply isn't a big enough player to substantially ruffle Google's feathers just yet. We can't really peer into that crystal ball.

What is clear, though, is that what Meizu's doing here isn't going to be sustainable indefinitely. At some point, they'll have to join the OHA and become a GMS partner, or Google will have to take action to avoid the appearance that it is accepting of or at least unbothered by the company's behavior. A failure to do either could lead to more Meizus, and a more fragmented Android - something Google would be very bothered about indeed.

An astute commenter points out a much more compelling reason for Meizu not being a GMS partner: The company, in addition to its FlymeOS phones, also sells phones powered by YunOS. YunOS was formerly known as Aliyun, and is an incompatible fork of the Android operating system that Google - to put it mildly - has something of a history with. Meizu announced new phones running YunOS as recently as August.

It seems safe to say, then, that Meizu's lack of GMS partner status is probably owed to the fact that they sell YunOS products. Unless YunOS were to go "compatible" with the definition of mainline Android or Meizu were to stop producing phones that run YunOS, they could never legitimately distribute Google Mobile Services on any of their smartphones.

Google's terms for being a GMS partner, a requirement to obtain Google's app suite, state that partners can produce no devices running incompatible forks of Android. Even if a partner produced 99 compatible devices and one incompatible one, that would mean none of their phones could run the Google Apps suite. So, even if Meizu's FlymeOS is compatible with Android, the fact that Meizu builds phones with YunOS, which is incompatible, means that none of their products can ship with Google Mobile Services. This story has even more contentious roots than I'd thought.