In my home, we have neighbors that love to be loud. People over almost every night, lots of banging, and music so loud that I can feel the bass in my chest. So along comes the latest update to AmpMe, an app that lets you sync together multiple Bluetooth devices. The app itself is not new, but the company behind it announced today that it now supports connecting speakers from different manufacturers into one sound system.

My thoughts turned immediately to how I could give my neighbors a taste of their own loud medicine, especially since AmpMe will handle all of the hard work for me. It uses a custom-built database to calculate for audio latency amongst all of the speakers that are connected via the app. 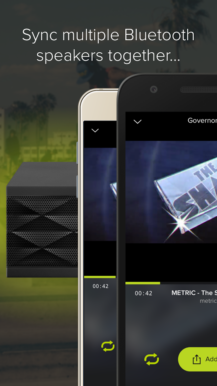 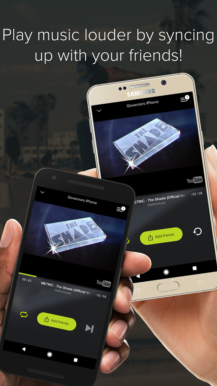 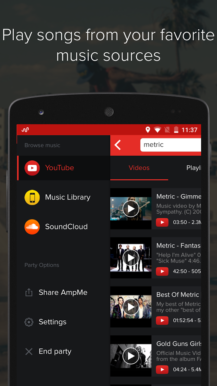 Here are some more details:

With more holiday sales coming, it might be worth paying more attention to some of the less expensive Bluetooth speakers that pop up. Have some people over and enjoy the party.

I reached out to the developers of AmpMe and they clarified some things. First of all, as some commenters pointed out, you must have one device per speaker. After reading through the PR, the app page, and watching an announcement video, this is not clear to new users. In my talks with the developer, they have acknowledged this lack of clarity and will take steps to resolve it.

"Yes, you're right— in order to sync the Bluetooth speakers, each needs to be paired with an AmpMe-enabled device (either a phone or tablet). There's a line in the release that says "The only limit is the number of devices in the party with AmpMe installed" but this could have been emphasized more."

Somewhat disappointing, really. I will also take this opportunity to correct myself on my error.

MONTREAL--(BUSINESS WIRE)--AmpMe, the app that allows users to play music in perfect sync across multiple devices to create one powerful sound system, today announced the ability to sync multiple Bluetooth speakers from different manufacturers together enabling anyone with an iOS or Android phone to crank the party up without limitations and create a huge sound system. The free app is now available in 144 countries around the world in the App Store and on Google Play.

Partygoers wishing to make Bluetooth syncing a reality can simply connect each Bluetooth speaker to any mobile phone before joining an AmpMe party. The smartphone will automatically sync to the Bluetooth speaker based on a custom-built database that calculates audio latency amongst all speakers engaged. The only limit is the number of devices in the party with AmpMe installed.

“We’ve built a sound system for the 99% -- gone are the days of spending a fortune to create the kind of sound we all deserve,” said AmpMe CEO Martin-Luc Archambault. “Launching the ability to sync any type of Bluetooth speaker together is the most democratizing step we’ve taken in our journey to build the world’s most portable, high quality sound system. We started with mobile devices like phones and tablets, so expanding the capability to any Bluetooth setup is the next frontier. We’re enabling music listening in a social manner and style that’s never been achieved before.”

Surround yourself with sound. AmpMe uses mobile phones to turn your friends into a powerful sound system. Play your music in perfect sync across multiple devices to create a powerful speaker. AmpMe is based in Montreal, Quebec and has raised $10 million USD from leading investors Relay Ventures, Investissement Québec, Slaight Music, OMERS Ventures, Townsgate Media, Anges Québec Capital and Real Ventures. Bring your music anywhere. Be the Speakers.

AmpMe respects intellectual property rights and encourages users to do the same by having fun with their friends and families in private.