The movie-going public owes a great debt to Gene Siskel and Roger Ebert. The "thumbs up, thumbs down" system breaks down a complex opinion into a simple yes/no question, "did you like it or not?" Its effects can still be seen on Reddit and even in the comments section of this very article - now all we need is some digital implementation of The Wagging Finger of Shame. Google's on board with the thumb system of movie and TV reviews, and has lately implemented it on its search pages in the Knowledge Graph section.

As spotted by Google Operating System, the user rating is tabulated and averaged, with Google giving its own user rating a dedicated section next to other sites like IMDb and Rotten Tomatoes. (It's on the left in the image above.) This is Google's latest attempt to present as much collected data as possible to users on the Search page and similar landing areas, and (somewhat controversially) negate the need to actually visit non-Google sites. The like and dislike buttons above are only appearing on the desktop version of Google search right now, not in the Google app or in mobile search pages, though they're visible if you force a desktop view. Expect them to show up on mobile searches sooner or later. 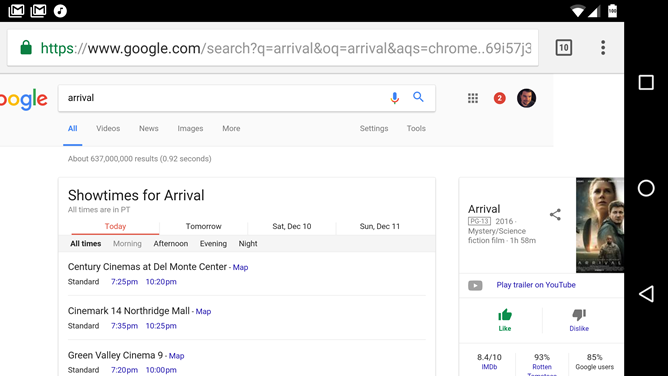 Presumably Google is recording your like and dislike clicks for relevant movies, though at the moment it doesn't seem to be doing anything for individual users. An easy way to use that data would be to add suggested movies in Google Play or Google Now based on past ratings, Netflix-style. We'll be watching for anything of that nature.

Yahoo Answers Now comes to Android with all its useful, random, and weird Q&As