We started getting reports of 4K videos rolling out in Google Play several weeks ago, but not everyone could see the 4K option and Google didn't list a separate price for it. Google has now made it official—4K video is available for rental or purchase in the Play Store. However, there isn't very much of it right now, and you can't even get 4K everywhere.

Only the US and Canada will have access to 4K videos at first. More regions will follow, and hopefully there will be more content by then too. Only 125 movies are available in 4K at launch (Google doesn't mention any 4K TV). The pricing shown in the blog post is $7.99 for a 4K rental and $29.99 to buy a 4K movie. Additionally, not all titles can be rented and bought in 4K. Sometimes it's just one or the other. 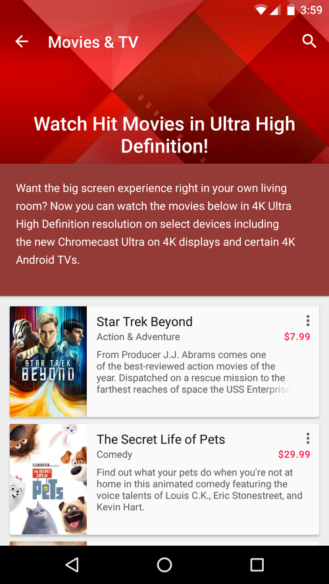 You can watch your 4K Google Play content on a Chromecast Ultra or on Sony Bravia 4K TVs with Android TV built-in. Interestingly, Google does not mention the Shield, which has 4K video output. It's not clear if that's an oversight or the Shield is somehow lacking support at present.

Google commits to 100% renewable energy for its global operations, starting in 2017

Android 7.1.1 update seems to fix some LTE Band 4 issues for the Pixel