Google is one of the largest and most far-reaching companies in worldwide tech, but it's also known for progressive (if not necessarily selfless) projects that go beyond its standard interests. Those include sponsorships and massive purchases for renewable energy, like buying portions of solar and wind energy production from farms in the US, Chile, and Sweden. According to the latest post on Google's Keyword blog, those purchases combined with renewable energy credits will account for 100% of the company's business operations in 2017.

Currently Google has 20 renewable energy projects in its corporate portfolio, most of which are relatively standard electricity purchase agreements from wind and solar farms. Electricity grids aren't integrated enough to create truly closed renewable energy systems for all of Google's far-flung business operations, but for the places where delivering 100% renewable energy isn't yet feasible, the company purchases renewable energy credits to offset its use of more conventional power production. 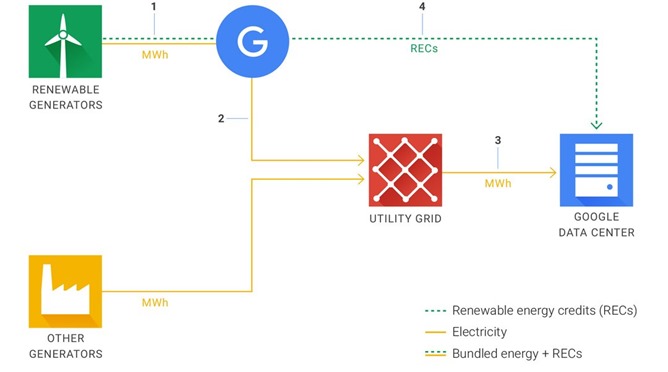 According to its own report, Google has committed to purchasing 2.6 gigawatts of combined energy between full renewable sources and renewable energy credits. That electricity is split between Google's massive data centers, its primary corporate campus in Mountain View, California, and its satellite offices and subsidiaries around the world. The company has also published a new environmental page to make its current projects more accessible.

Google makes 4K video official in Google Play, but only for the US and Canada right now