Android Auto has existed for almost two years now, but it's improved only slightly in that time. One of the more vexing inadequacies in Android Auto thus far has been the lack of OK Google support. With the latest version, the hotword trigger is finally a thing.

Just like with your phone, Android Auto now supports saying OK Google to wake up the voice control interface. There's a toggle in the Google voice settings where you set how you want the hotword to work. Prior to this update, the "While driving" toggle only listed Google Maps. After the update, most people see both Google Maps and Android Auto listed. It's probably a combination of the new APK and an account-level switch. 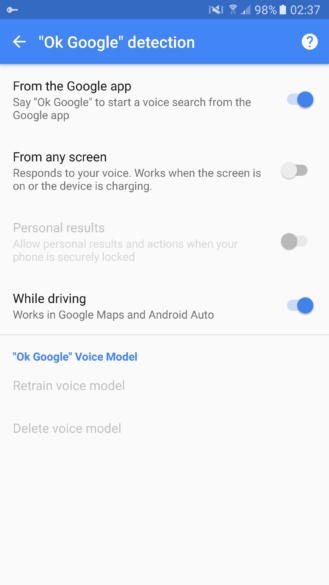 You can grab the latest build of Android Auto from APK Mirror and give it a shot yourself. You will likely also need the latest Google app update, but check your device first. You might already have it. There are plenty of successes and a few failures in this Reddit thread (above image via /u/neo5468). Let us know how it goes.

DIRECTV NOW gets a dedicated Android app, right on schedule

Fitbit may be preparing to purchase Pebble, existing Pebble products will be phased out