Pebble is one of the best Kickstarter success stories. Predating the original Samsung Gear and Android Wear, Pebble's first fundraising campaign raised over $10 million and spawned multiple generations and models of e-paper wearables. But as many tech startups eventually do, Pebble is being acquired by wearable competitor Fitbit.

The Information reports that the purchase comes after continued financial troubles at Pebble, with Pebble's stock falling from a peak of $49 in August to about $8 today. If you were hoping for more Pebble devices down the road, you won't be happy to hear that Fitbit plans to phase out the entire Pebble brand. The purchase is mainly to gain access to the company's intellectual property, including Pebble's operating system.

Shortly after news broke, Pebble simply tweeted the ¯\_(ツ)_/¯ emoticon. That could be a reaction from Pebble about the announcement leaking early, a description of the company's future, or a summary of Pebble customers' feelings right now. The tweet is now deleted, but as I'm sure you all know, nothing is ever truly deleted from the internet. 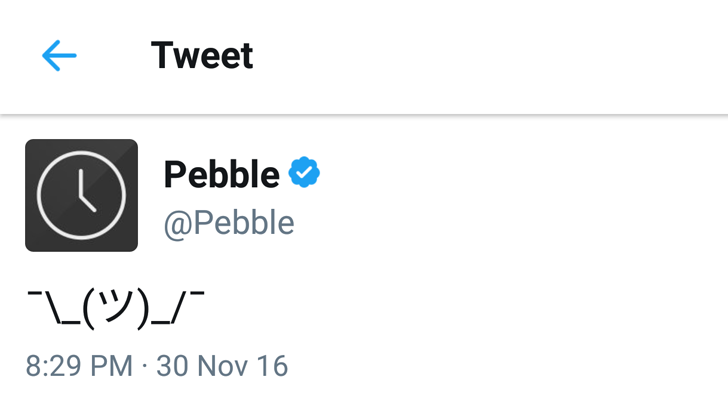 I've never purchased a Pebble device, but I was always cheering for them as the 'underdog' in the wearable industry. Hopefully Pebble or Fitbit will make an actual statement soon.