Sony's Xperia Ear has been available since earlier this month (or mid-October if you count pre-orders) after being announced at MWC in February, and now we have the final piece of the puzzle: the companion app, allowing users to configure and control the app according to personal preference. 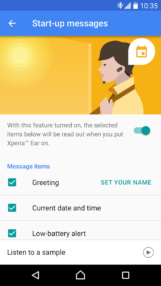 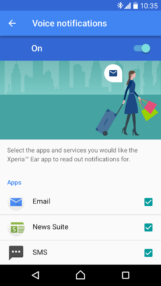 For a brief recap, when you put the Ear into, um, your ear, it will tell you your schedule, the weather, and the latest news. It has a gyroscope and accelerometer, so it can tell what position it's in, when you're walking, or if you're asleep. This means you can nod to confirm something, which is pretty cool, or shake your head to decline.

This is all controllable through the Xperia Ear app, which is available on Google Play. You can turn features on or off here depending on your preference, and generally make tweaks to the product. Not happy with the startup messages? Turn them off. Want the headset to alert you when it's low on battery? Fair enough, that can be switched on (or off). Your name can also be set in the app, so the headset will greet you accordingly. Button presses on the headset can be configured too, if you want to change what a long or short press does.

The app is available on Google Play now, and is compatible with all devices running 4.4 KitKat and up, although a few LG models and some Xiaomi devices will not function with the Ear. Check the Play Store listing for more information. Otherwise, if you're planning on buying an Xperia Ear, which retails for £179 in the UK, €199 in Europe, and $199 in the United States (Fry's, ABT, B&H), you're probably going to want this app. 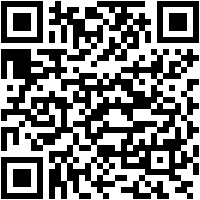