If you've been reading anything about traffic fatalities in the United States in the last year or so, you've probably heard that we're in the midst of a rather alarming increase in the number of people dying on American roads. In 2015, over 38,000 people were killed in vehicular incidents (this includes pedestrians, cyclists, solo crashes, and multi-vehicle accidents). That was an increase of 7.2% over 2014. 2016 is looking much worse yet, seeing a surge of around 10% over the already grim 2015 numbers. For comparison, the traffic death rate per 100 million vehicle miles is also way up, the worst it's been in seven years (i.e., this is not a simple result of more miles being driven). This is even as new vehicles get safer for both occupants and pedestrians alike, and the DUI fatality rate in the US remains relatively stable (though DUI deaths did increase in 2015 by around 3%).

While the NHTSA has avoided commenting directly on a particular reason behind the surge both in deaths and the death rate, news today from the agency makes it clear what they think a major contributing factor is: your smartphone. And that's not remotely hard to believe. Distracted driving accounted for an outsized portion of traffic death growth in 2015, with distraction-related deaths up 8.8% versus the overall 7.2% increase in fatalities that year. And that's only of those incidents that could be categorized as being a result of distraction - there's often no way to tell in a pedestrian hit and run fatality, for example, what the driver was doing when they struck a person. And drivers facing potential criminal consequences are very unlikely to volunteer that they were using a phone when a fatal incident occurred. 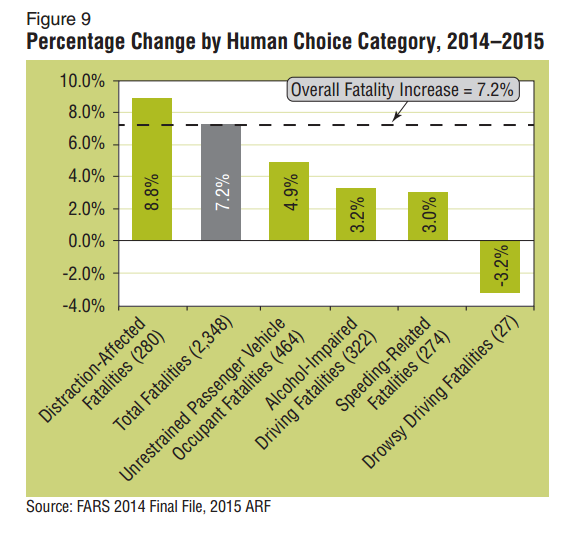 The NHTSA's new guidelines, though, are just that: guidelines. And they're geared toward the makers of smartphones and smartphone software, not law enforcement or state agencies as potential legislative guides. The gist is that the NHTSA wants all smartphones to have a "driver mode" that greatly restricts a smartphone's available functions while someone is driving a vehicle. Systems like Apple CarPlay and Android Auto, of course, already do this, and both are designed with the NHTSA's in-vehicle infotainment safety guidelines strictly in mind. But the penetration of these in-dash systems in the market is very low at the moment, even if steadily increasing.

And with features like the Android Auto's phone-only mode - almost certainly also designed to meet NHTSA safety guides - we're perhaps getting a little closer to confronting this problem. But the reality is that drivers have little reason to abide by the restrictions of such interfaces if they don't like them, and can simply "unplug" or exit the app if they find it too confining for their in-car smartphone habits. So it's unclear what the NHTSA really hopes to resolve with this new set of not-rules. The related documentation is 96 pages long, so it's quite a hefty read, and I haven't given it much more than a cursory [digital] thumbing through yet.

The main issues center around how software and phonemakers would work with carmakers to determine who is the driver (i.e., how to make the restricted mode responsive if the device is given to a passenger), and based on what I'm reading in the document, it's not one we're going to easily solve any time soon. But, in essence, it seems like the NHTSA wants to encourage these companies to work together in such a way that, if your car can tell you have a phone and you're the driver, the phone becomes much harder to use, with the vehicle instead pushing most tasks through the infotainment display or a much more limited interface on the smartphone itself. This is all still very early, but it's clear the NHTSA is taking this problem seriously, and cooperation with the agency from Google and Apple to date in their own in-car efforts probably means the industry is taking them seriously in turn.

There's no doubt in-vehicle phone use is a huge and dangerous problem, so maybe safer solutions will, eventually, come of all this.

Microsoft Solitaire Collection now available for Android, in all its ad-supported glory

LeEco LePro 3 review: the best smartphone deal around just isn't worth the compromise