Google's Daydream is what I would call the most travel-friendly VR solution yet. Its simple but elegant pointer-style Bluetooth controller means you aren't reaching all over the place to work the VR interface, its comfortable fabric design is tolerable for long periods of wear, and sliding the phone into the viewer is a simple no buttons, no switches affair.

So, I decided to put these qualities to test on a five-hour flight from Los Angeles to New York last week. I had a variety of games (I didn't play any), interactive experiences (many require an active internet connection), and a few movies I'd downloaded from Play Movies to watch. That last one seems to be the ideal mobile use case for VR: zoning out with a good, or at least entertaining, two hours while the world around you falls away. Watching a movie in VR is immensely private and can, in theory, help you forget you're crammed in a giant aluminum tube with several-hundred other human beings. Sounds appealing!

And I have to say, when it works, it totally is. The two hours I spent watching Star Trek: Beyond from the comfort of the Daydream View were less stressful, less distracted, and more focused on the simple joy of watching a fun movie. So, all's well then? Mobile VR is ready for prime time as a travel gadget? 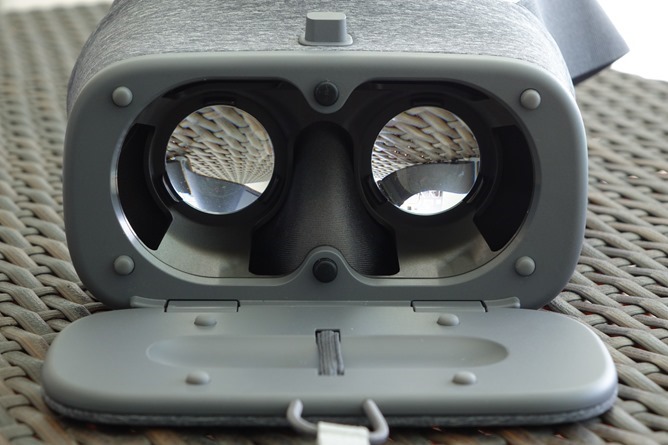 You can probably guess the answer isn't the resounding "yes" companies like Google might have you believe. Mobile VR, for all that it can excel at, is still a finicky, inconvenient, and not always practical platform. Daydream is on the bleeding edge of this concept, and it shows. So let me rewind a bit here, and I'll tell you how things went down.

When I downloaded my movies for in-flight VR viewing, I did so via Google Play Movies - three of them. I also had said games and interactive experiences, but really, I'd tried most of them and found nothing worth actually returning to, so movies were my only hope for genuine use here. I charged up a second Pixel XL provided by Google explicitly for reviewing the Daydream View alongside my black Pixel XL. I wasn't ready to try this with only one phone on hand: I feared for battery implications, even if I was packing a 20000mAh portable charger.

By the time I boarded the plane, I had the VR headset out of my carry-on and placed it, the remote, and the already-attached Pixel XL (90% battery remaining, screen off, airplane mode) in my lap and waited to reach a steadier altitude. I put it on, and Daydream started up as usual - I grabbed the remote and started the orientation flow.

The remote wasn't being detected.

I thought; had my pairing the remote to my second Pixel XL somehow confused it? Was the battery dead? I de-paired it from the silver Pixel XL (or tried - I don't think I ever succeeded), and tried to re-pair it manually. No luck. Every time the pairing process would start to engage, the remote's pulsing white light would suddenly turn off. I thought this could be a low battery, but when I tried to turn the remote back on again, the pulsing LED returned and would even keep pulsing for up to 30 seconds, which to me said it was ready to pair. Long story short, though: the battery was almost dead, I just didn't know that attempting then failing the pairing process, accompanied with a white LED turning off, meant that. There really should be a red LED to indicate low battery on the remote. As is, you can't even discern how charged the remote is, and the current method for indicating low battery is confusing at best and outright misleading at worst. 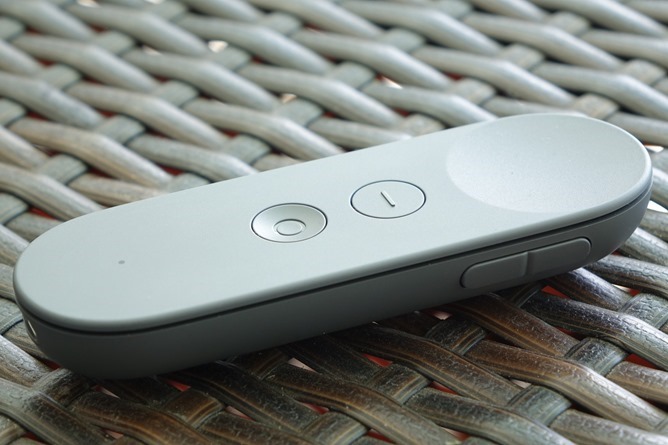 I plugged the remote into my seat's USB power and, thankfully, that was enough to get it working almost instantly. I opened Google Play Movies in the Daydream launcher, and I was greeted with a spinning loading icon. It spun, and spun, and spun... and nothing happened (I should note, the XL was connected to the in-flight Wi-Fi just in case I needed connectivity for something in Daydream). I closed the app, opened it again. Still spinning. I took out the phone, cleared the Daydream app cache, and tried again. Spinning icon. This was deeply frustrating - I had no idea what the phone was trying to do, or why the app would take so long to load. Apparently, it's part of a first-run process for the Play Movies VR app, and it was attempting to download assets or something. Because when I disabled Wi-Fi on the phone, suddenly the Play Movies app loaded up with my downloaded movies just fine. OK, but at that point, everything was OK, right?

Well, I saw two movies in my library. I had absolutely downloaded three: Star Trek Beyond, The Jungle Book, and Sausage Party. The Jungle Book wasn't there. I still don't know why. Not the end of the world! But still, annoying.

I started Star Trek Beyond and the film played with no issues for about 20 minutes. It was nice. Then, my seat-mate needed to get up to use the restroom, and so I took off the headset and detached the headphones for ease of movement. I sat back down and reconnected the headphones only to find I no longer had audio. I turned Daydream off and on, but the problem persisted. I rebooted the phone, which did fix it. I was determined to get back to my movie, and so I soldiered on.

The actual viewing experience was pretty enjoyable. The screen-door effect and black pixel ghosting aside (problems that simply cannot be easily solved right now), I felt much more comfortable watching a movie inside my own private little VR bubble than staring at the headrest in front of me. I felt more relaxed, time seemed to pass more quickly, and I was genuinely engrossed in the movie (Star Trek Beyond, while a bit silly and confounding in its logic at times, is a worthwhile watch). 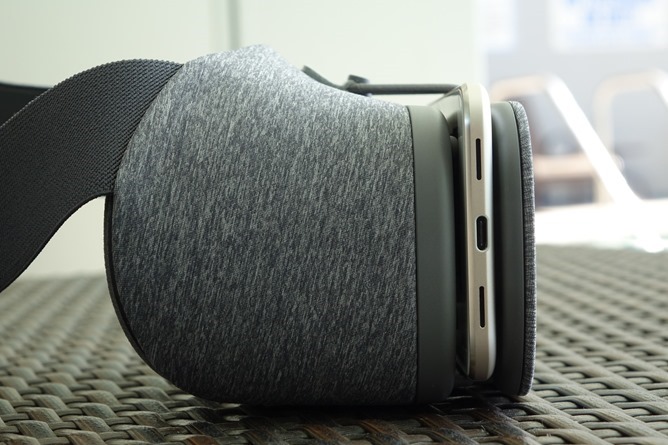 An easily accessible charging port is a potentially useful feature of the View I'd rather not have to use.

The movie ended, and we were around two hours from landing at that point. I figured I would start up Sausage Party to pass the rest of the flight... and then I looked at my battery: 30% remaining. I had started at 90%! A single, two-hour VR movie experience drained 60% of the Pixel XL's battery. This isn't hard to believe: the phone gets very, very hot while Daydream is running, even if just a movie, and so it's absolutely drinking down energy. I could have plugged it in to a charger while in the viewer, but that would cause the phone to get hotter yet, and I didn't want to get interrupted by overheat messages or stuttering performance. Plus, having another cable hanging off the viewer is just so... not VR. I would have been using wireless headphones if I'd had room for them for a truly no-wire mobile VR expedition, but putting a charging cable on the phone while in the viewer was just too much.

So, I didn't watch Sausage Party. I put the phone in my bag and on the mobile charger, and set the Daydream View aside for the rest of the flight. Had I only brought one phone, I would have managed, but this seems like a significant drawback to the experience. If you spend most of your flight watching movies in VR and don't bother to keep track of your battery, you could walk off a plane with a nearly dead phone. Now, that'd only happen once, but it's easy to see how it could dissuade people from using VR in this way. It paints a picture of an experience that simply doesn't seem quite ready for the real world just yet.

Anyway, that's just my experience - I'm sure many of you will have Daydream stories and opinions to share in the coming weeks, and I welcome them. My first attempt to use Daydream in a "practical" way did, at its very heart, leave me entertained for over two hours in a way that a tablet, laptop, or my phone just quite couldn't match. But the edges of that experience are considerably rougher than even I had expected going in, and my next in-flight VR experience will probably involve a bit more preparation and, sadly, almost certainly a second, VR-only phone.

Phone 7.0 appears with a tweaked swipe up to answer [APK Download]