Despite being released on August 22, hardly any devices outside of Google's Nexus and Pixel lineups officially run Android Nougat. In fact, only about 0.3% of all Android devices with the Play Store actually have it. Many Verizon customers have reported that their Moto Z Droid and Moto Z Droid Force phones have received OTAs to Nougat. 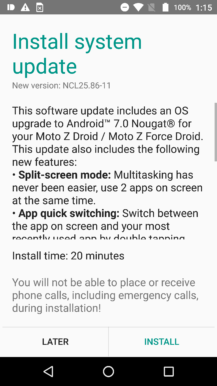 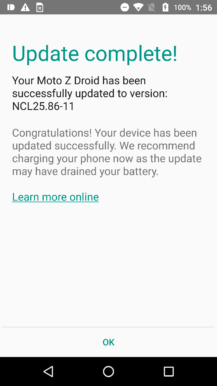 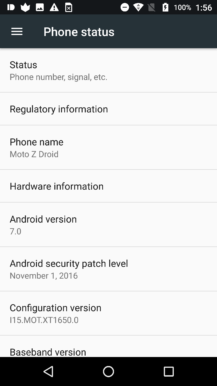 The update brings the device to Android 7.0 (not 7.1) with the November 1st security patch level. The update also allows the Z Droid and Z Droid Force to use Daydream mode, joining the ZTE Axon 7 as the only non-Pixel devices with the feature. In addition, the update finally brings Camera API 2 support, allowing certain applications to more fully control the camera.

The download is a whopping 1586 MB, so you might want to grab it over Wi-Fi. As always, software updates roll out over the course of several days, so all owners should receive it shortly.

Motorola has made the update official on its company blog, announcing that Android 7.0 Nougat will be rolling out this week to the Moto Z and Moto Z Force (not just the Droid editions). Motorola seemed to forget about the ZTE Axon 7 when it called the Z and Z Force, "the first smartphones from another manufacturer to be recognized by Google as Daydream-ready devices." Oops.