Asus has been one of the more persistent promoters of Android Wear since it was released. As other companies have scaled back on wearables, Asus is full speed ahead with a third-generation ZenWatch. The first ZenWatch was a solid addition to the initial wave of watches, and the ZenWatch 2 had some appeal due to the extremely competitive price. Both those watches had the same rounded square body and general aesthetic, but the ZenWatch 3 is a radical departure. This is a completely round watch—no flat tire—and it makes more tweaks to the UI of Android Wear than any watch I've used before.

This device is coming along at a time of uncertainty for Android Wear. It launches with Wear 1.5 as the 2.0 build was pushed back into 2017. It's not easy to justify spending a lot of money on a smartwatch without knowing how the 2.0 update is going to shake out, but the ZenWatch 3 compares very well to the smartwatches that have been released so far.

There was some concern when the ZenWatch 3 first leaked because let's face it, this is an unusual design. I think calling it vaguely "steampunk" is a fair assessment. The buttons stick out, looking like gaskets or gauges. The lugs also have an unusual, blocky design. Then there's the brass finish, which reinforces the steampunk-ness. You know what, though? It all kind of works. The ZenWatch 3 looks much nicer in-person than it does in photos. I know that's something we say a lot, but it's very true here. The design won't be for everyone, but I've had more strangers compliment this watch than any other Android Wear device I've worn. 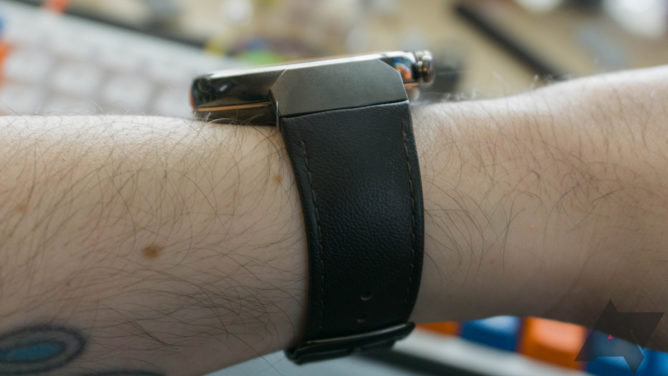 The case is made from 316L stainless steel, including the bottom. Some OEMs cheap out by putting plastic on the underside of the watch, but not Asus. Although, there's no heart rate sensor under there. The crown buttons on this watch are fantastic—possibly the nicest of any Wear device. They have good tactility and just the right amount of travel and resistance. I personally like the boldness of the buttons as opposed to the more subtle buttons on other smartwatches that try to imitate the rotating crown on a traditional watch. 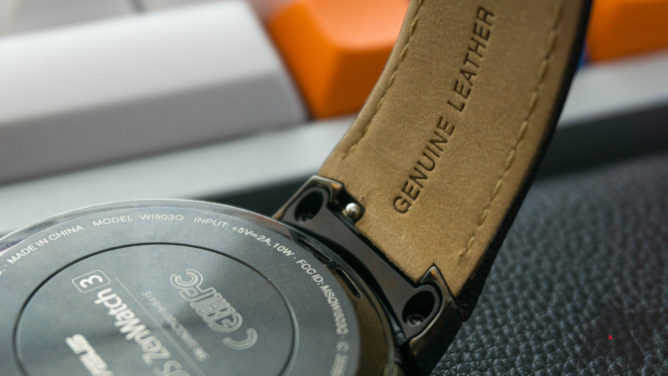 The flat, angular lugs are not as big as you probably expect from photos, but they are on the large side. They extend downward past the bottom of the watch, making for a more comfortable fit for those of us with smaller wrists. One thing I'm not in love with is the band attachment. It's a standard quick release pin, but it's tiny. The band itself is about 20mm wide, but it narrows to 10mm where it connects to the body of the watch. It's like the Huawei Watch, but much more extreme. The large lugs hide this narrowing, though. This means you can't use just any standard watch band on the ZenWatch 3 without some serious modification. NATO band fans, you're completely out of luck. The stock band is fine, probably even above average for a smartwatch. It's genuine leather and seems flexible without being too soft.

The ZenWatch 3's case is 45mm wide, so it's a little bigger than the Huawei Watch or the 42mm Moto 360 v2, but smaller than the 46mm 360 v2. It's a good middle ground, and there's only the one size this year. The ZenWatch 2 came in two sizes, but the smaller one didn't look very nice in-person. 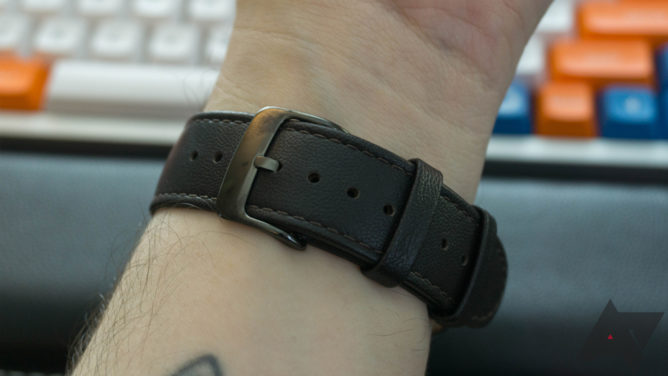 Asus is still using pogo pins on the underside of the watch to charge it. However, the cable is much improved. It's a magnetic ring that only fits on the watch in the correct way. Imagine the Huawei Watch's charger, but not terrible. That's the ZenWatch 3 charger.

Square watches are done. Asus made the most attractive square watches, and now even it has had to admit that people want smartwatches that look like real watches. Well, insofar as there are people who want smartwatches at all. This 1.39-inch AMOLED display has a resolution of 400x400 and is completely round (just like the Hwatch). The display is clear and has great viewing angles. There's also no ghosting visible. So, basically the exact opposite of the awful display on the new Fossil watches. 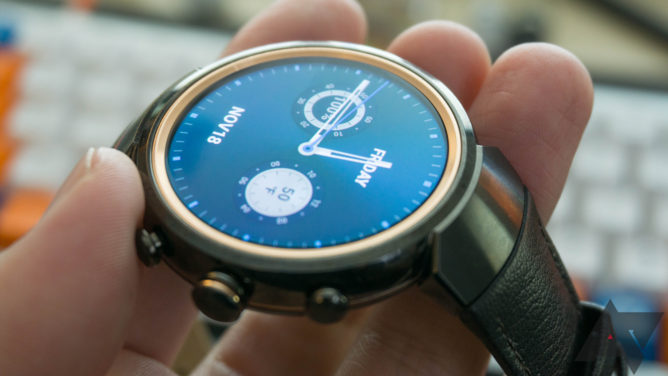 I was surprised to learn that the ZenWatch 3 has an ambient light sensor, which I've never seen before on a watch with a fully round display. Usually, you see these on flat tire screens down in the cut-off section. The ZW3 actually has multiple sensor windows hidden around the periphery of the display. It's a clever design. This is a really cool feature that can save you from messing around with manual brightness levels to save battery. Although, it doesn't seem to work quite as well as the light sensor on watches like the Moto 360 v2. At times it's a little slow to respond and in a moderately bright room it often sets the brightness slightly too dim for my taste. In general, the maximum brightness is good. It's not the brightest display, but it's readable outdoors.

The ZenWatch 3 is the second device I've used with the new Snapdragon Wear 2100 SoC, which has been designed specifically for use in wearables devices. Past watches simply had a modified Snapdragon 400. The SD2100 is supposed to offer more performance and better battery life, which is what we're told about every new ARM chip. It is a little better, though.

Asus seems to have done a better job of optimizing this watch than Fossil did with the Q Wander and Marshal (also powered by the 2100). Performance is smoother than most older watches, and the battery life has gotten a solid boost. Scrolling through lists is much more responsive, and swiping through apps doesn't exhibit as many hiccups as I'm used to seeing on Wear. Apps also open very quickly for the most part. That said, there are still times when found myself waiting on the watch to do something. I suppose that's just the nature of the beast right now. 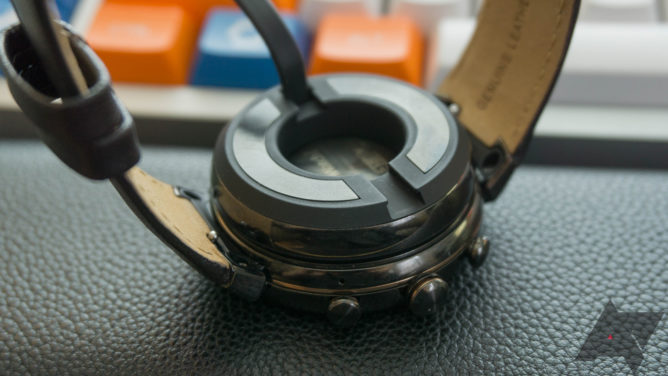 I think I'm probably harder on a Wear device's battery than most people. I have three email accounts syncing on my phone, and I test a lot of apps (some of which have Wear components I never even know about until I'm scrolling through the app list). For me, most Wear devices last around a day with the display set to always on. The ZenWatch 3 is solidly above average with around a day and a half of usage. Some people would probably be able to eke out two days.

The ZenWatch 3 also has a fast-charging technology that Asus calls "HyperCharge." It can apparently get the device from empty to 60% in 15 minutes. I don't know if it's quite that speedy, but it's definitely an improvement over other watches. Although, the proprietary charger means you won't find a fast charge cable out in the real world like you might with a phone.

Okay, Android Wear is what it is, right? Well, not this time, at least not entirely. The ZenWatch 3 has the most customized version of Android Wear I've ever seen. The main stack of cards is unchanged, but venture into the app list or the settings and you might be confused. Instead of the gray/white UI we're used to, it's all black or dark gray with gold text. It matches the physical device extremely well. Granted, this isn't a major departure from the stock UI, but it's an interesting touch and it shows Asus paid more attention to the ZenWatch 3 than other makers of Wear devices.

There are a few other tweaks as well. For example, those buttons. What are they for? The main one does what the crown button on any Wear device would do. The lower button enters "Eco mode," which is basically airplane mode with a few other battery-saving features. The top button is programmable via the Button Settings app. I have it linked to the system settings because Android Wear makes it unnecessarily tedious to get there. 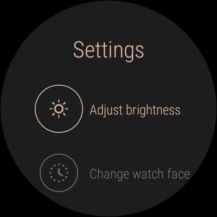 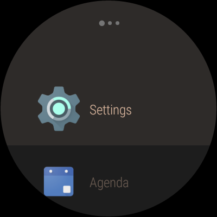 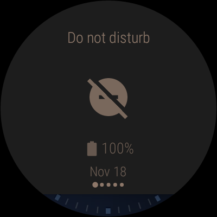 I've always been a little conflicted about the pre-installed Asus watch faces. Some of them are quite good, but a lot of them are really not. Unfortunately, Asus has so many watch faces that it's annoying to scroll through the list to find the good ones. With the ZenWatch 3, Asus isn't pre-loading every watch face it makes. However, if you install the ZenWatch Manager, you'll get a bunch more synced over. As I sit here, there are 77 watch faces on the ZenWatch 3, and about 60 of them are from Asus. This is not okay. Yes, you can hide watch faces via the Android Wear app, but should you really have to hide dozens of them? Asus seems to simply make as many watch faces as it can, knowing you'll probably like at least a few of them. Compare this to Motorola, which only has a handful of highly-customizable, well-designed watch faces. I like Moto's approach better. Of course, Motorola didn't make an Android Wear watch this year. I've added images of some Asus watch faces above (it would take ages to capture all of them thanks to Wear's terrible screenshot management). As you can see, they really run the gamut from minimal and generally attractive, to weird or awkward. Many of the watch faces also have full-color ambient modes, which makes zero sense with an AMOLED display. The ZenWatch Manager app is at least rather nice to use—it includes ample settings and customization options for the watch faces.

If we lived in a world where Android Wear was not in limbo, I'd recommend the ZenWatch 3 with very little reservation. If you want a smartwatch powered by Android Wear, it's absolutely one of the best you can get. The display is solid, and it's got ambient light sensors despite being completely round. The software has been tweaked a little, and it's optimized well with the Snapdragon 2100. Aesthetically, I think the ZenWatch 3 is a winner. You might not dig the bold, steampunk-y design, but it's a refreshing change. 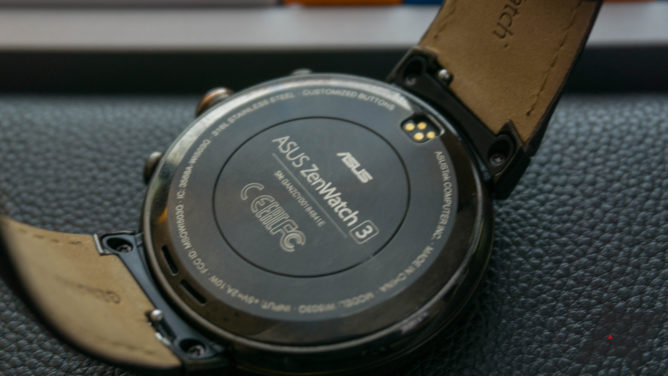 Still, we can't ignore the realities of Android Wear. Google isn't releasing the Wear 2.0 update until early 2017, and we don't yet know what that'll look like. Maybe it won't even come to many of the old watches. I certainly hope a device running the Snapdragon 2100 will get the nod, but it's impossible to say. It's feasible that only new watches and those that were part of the dev preview will get official updates.

The Asus ZenWatch 3 retails for $229.99, which is competitive with other Wear devices. It really puts the Fossil watches to shame. In fact, I'd say that if you're going to buy an Android Wear device right now, it should be the ZenWatch 3. You'll just have to cross your fingers when it comes to future updates.

Nexar turns any Android phone into an always-on AR dashcam