For more than a year, I have been using Enpass to save my passwords and other personal information, and absolutely loving it. I know there are alternatives, but for more reasons than I can count, Enpass is the best for me. If you're an Enpass user as well, there's probably one piece of the puzzle that you've been missing: Chromebook support. The existing Enpass Chrome extension only works if you are on a desktop computer with the Enpass app installed, so it's of no use on Chrome OS. But ever since Google announced Android apps would be able to run on Chrome OS, the Enpass dev has been hard at work making his app compatible with the platform. And now it's here.

The existing Enpass Android app — the same one you've been running on your phone and/or tablet — is now compatible in v.5.4.6 with Chrome OS, so it'll run just fine on the Chromebooks that already support the Play Store and Android apps. For now, the list is small with only the Asus Chromebook Flip and Chromebook R11 / C738T, as well as the Google Chromebook Pixel (2015). But as more Chromebooks on that list get official Android app support, they'll also be able to run Enpass.

Since this is the same Android app you're used to, you shouldn't find any difficulty getting your premium license to work (if you already purchased one), syncing your data with any of the services supported by Enpass (Google Drive, Dropbox, your own cloud, and more), viewing and editing all your logins, generating passwords, encrypting your data, and using all of Enpass' other features. And it all works offline as long as your data is synced.

However, there's one more aspect of Enpass' Chrome OS presence: the Chromebook Connector for Enpass extension. Thanks to it, you can have a tight integration between the Enpass app and your Chrome browser, including autofill for logins and cards on any site, as well as saving and editing login data to Enpass from the browser. There's a whole user manual section here dedicated to explaining everything you can do with the Connector. 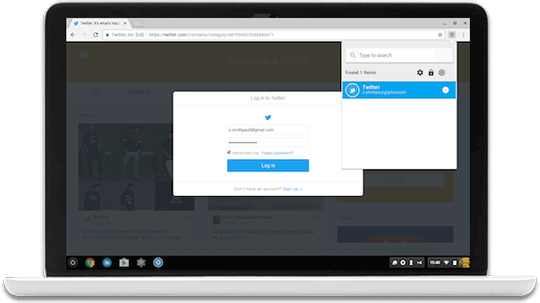 Beside Chromebook support, a few more additions are found in Enpass v5.4.6. You can now back up and restore your data from a local folder in case you don't trust any cloud service to get your data. And there's a new onboarding with quicker fingerprint setup.

Chromebook users, Welcome aboard to Enpass!
WHAT'S NEW
* Autofill in CHROMEBOOK using "Chromebook connector for Enpass".
* Option to sync data with any folder on device.
* New quick setup page to enable Fingerprint and more.
IMPROVEMENTS
* Now you can take backup in any folder and restore from there.
* Improved selective field sharing.
* Compatibility improvements for Android N.
and other bug fixes.
We are listening to you on Twitter @EnpassApp and Forums here https://discussion.enpass.io.

Enpass is free on the Play Store for your Android phones, tablets, and Chromebooks, but it's limited to 20 items. If you want to save more, the lifetime license costs $9.99 per mobile platform (so you'll have to pay twice if you also have iOS devices), but if you ask me, it's totally worth it.

BBC releases the Story of Life, a collection of Sir David Attenborough's work