BLU doesn't have a particularly great reputation for its phones' software, and the recent discovery of spyware on its phones, including those sold in the US, certainly didn't help it. However, the company's popular R1 HD, best known for costing Amazon Prime members only $50, has just received an update with some nice improvements for T-Mobile customers. 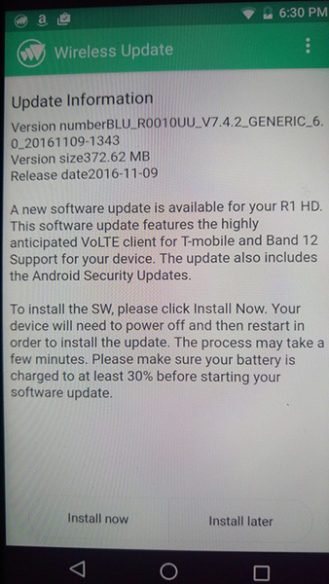 After updating, R1 HDs will be capable of connecting to T-Mobile's band 12. This allows for better indoor reception and greater range than previously possible. It also brings VoLTE (Voice over LTE), which I'd like to think is pretty self-explanatory. Even though these features have been promised to R1 HD owners for a while now, it's nice to see BLU finally fulfill this obligation.

The update, which weighs in at around 373MB and carries the version number BLU_R0010UU_V7.4.2GENERIC_6.0_20161109-1343, also brings "Android Security Updates," although it's unclear which ones. The R1 HD's been out of stock on Amazon for a few months, but these additions will no doubt please existing owners on T-Mo.