To say that there are a lot of SMS clients on Android would be an understatement. Yet most people tend to stick to the default one that came with their phones and we know that a lot of those lack any useful or cool features. The name of Klinker should be familiar to some, since they gave us Talon for Twitter, Sliding Messaging, and EvolveSMS. Even though it's just Luke now, that doesn't mean that the neat apps have stopped. You may recall that back in September, Klinker released a beta for a new messaging app (then called "Messenger"). That app officially released today under the name of Pulse, and it's pretty awesome.

Upon install, the app acts like any other text messaging app. It asks for the permissions it needs, imports your messages, and shows you an overview. From here you can adjust global settings like themes or you can go into each thread and adjust settings based on contacts. 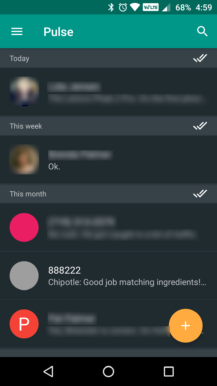 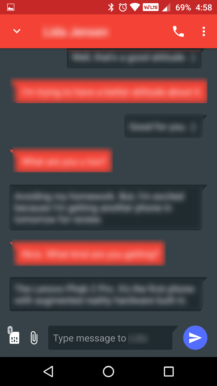 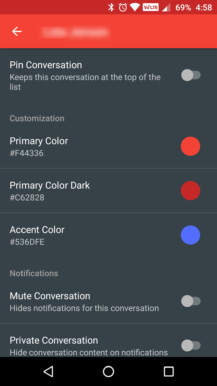 Besides being a highly functional, pretty SMS app, Pulse brings something new to the table. Upon creating an account, you can access your text messages and reply to them from any Android phone, tablet, or TV or computer via a web portal, a Chrome app, or Chrome extension. If it seems a little like Pushbullet that's because it is except that it is limited to only your SMS.

This service will cost, however. Klinker offers a 7-day trial and then multiple different pricing options. Full lifetime access will set you back $10.99 or you can subscribe for $5.99 per year, $1.99 for three months, or $0.99 per month. In all, it's not too unreasonable considering Pushbullet Pro's pricing. Sure, you do not get the total functionality, but you get the warm feeling of supporting an indie dev instead.

I have installed this as my default SMS app and I really like it so far. The slew of customization options, convenience features, and overall utility are great. Luke Klinker has said he has a lot of ideas for the app, so it will only get better from here. Pulse is free to download in the Play Store and certainly worth a try.

'Quick, Draw!' is like Draw Something, but with Google's artificial intelligence network

Twitter launches Snapchat-like QR codes for profiles, because why not