Android Auto v2.0 began rolling out earlier this week with a pretty significant redesign that made the driving mode part of the app's primary UI. There were quite a few changes to support the on-phone Auto simulator, including a fair number of new options like the ability to auto-launch with certain Bluetooth connections (and prevent that if it's still in a pocket).

While most of the new features are easy to discover when poking around in either the driving mode interface or in the couple of config screens, there's a new feature in the audio player that deserves to be called out on its own. It allows users to jump around on most long lists like queues and playlists. A look inside the apk also reveals quite a few features that didn't make it out in the first release of v2.0.

If you're poking around any long lists in one of your audio apps on Android Auto, you're probably going to notice a new Floating Action Button (FAB) hanging out at the top right. Hit the button and you'll be shown a large onscreen keyboard. Most of the letters will be disabled, but tapping on any of the enabled letters will return you to the list you were just looking at, but all of the items starting with that letter will be stacked together. If you're paying very close attention, the FAB is also updated to show the chosen letter.

At first glance, the behavior seems to be a bit of a cross between a quick search function and a way to hop around on a list. As it turns out, if the list isn't already in alphabetical order, picking a letter will sort all of the items so everything starting with that letter will appear together. Backing out from there will return the list to its original order. 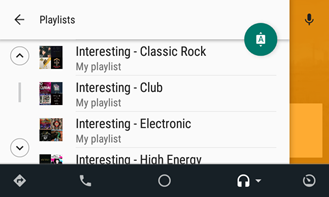 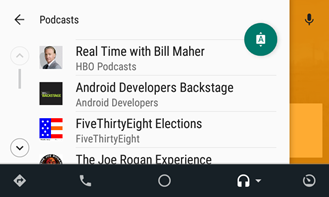 Shows up on Playlists and Podcasts.

Also appears on PocketCasts (and other audio apps), but not very useful with podcast episodes.

The FAB appears on most screens where lists can get long. I've seen it in Play Music on my queue, inside of playlists, and even on the list of playlists. The best part it's part of the standard audio player interface, which means every audio app will get it automatically. App developers won't have to manually add support.

Unfortunately, this feature isn't all that useful for podcasts since so many shows title their episodes very uniformly, sometimes with just numbers or the word "episode" at the beginning. It's pretty obvious this becomes a problem when only a couple of letters are available in the picker.

There were quite a few settings in the app that haven't gone live yet, so I'm going to start with those. Most of these were probably supposed to be part of the v2.0 update, but couldn't be finished in time for the launch. Even so, these mark a fairly notable opportunity to improve the user experience and customizability, especially when users pass from one vehicle to another.

Since most of these are self-explanatory, even with just the titles, I'm going to keep the descriptions pretty short. It doesn't take much to understand what each one does.

One of the biggest surprises you can get with anything that produces sound is when the volume level is significantly louder than expected. Judging by one description, there will be a setting dedicated to solving that very problem. It will be called "auto volume" and its sole function is to restore the volume to whatever level it was at the last time you drove.

This will probably be most beneficial to people that share vehicles or end up in rentals fairly often. Note, this setting may depend on compatibility with vehicles and in-car systems, since some of them might not support direct volume control from Android Auto.

My question – and this goes for all Android's quick settings, too – why don't we have landscape lock? Seriously, sometimes I want to lock it in landscape, but nobody ever offers that option.

One of the original smart features of Android Auto was that it knew to switch between day mode and night mode depending on the time of day (and possibly with other variables like car headlights, ambient light sensors, etc.). Some cars actually allow you to set this for yourself, but there will soon be a setting that also enables you to control it right on the phone. This setting will also be handy for the on-phone simulator.

The options will include: Automatic, Forced Night Mode, and Forced Day Mode.

Since Android Auto launched, one of the top complaints is that voice commands can't be given without either reaching across to the center console and taking our eyes off the road to look for a small-ish onscreen button or holding a button on the steering wheel for a bit longer than most of us feel it should take. This is made more prevalent when our phones are usually smart enough to listen for the now ubiquitous "Ok Google" trigger phrase. Google promised that an always-listening mode would be added to Android Auto, and it appears that it may have been intended for this release.

A setting in the app will allow the always-listening mode to accept "Ok Google" commands or turn them off if desired. The announcement blog post was a little vague, but it referenced voice commands as being for music, messaging, and maps. It's not clear if this means it will be limited, and there are no clues to suggest if phones with Google assistant will use the newer system or default back to the older voice controls. Whatever the case may be, at least we're finally getting it.

Shortcut to your car 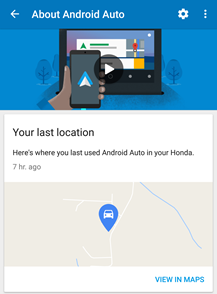 Nearly a year ago, the Auto team included evidence that a parking reminder would be appearing in the app at some point or another. The feature has been in Google Now for a long time, and some people were already getting it in the Auto app, but it's not always available in either. With the v2.0 update, the tracker should show up in the About screen pretty consistently. You should also be able to tap on a link at the bottom right to open the location in Maps, but it seems to be broken for me.

Of course, getting to this screen is a bit of a slog since it means manually opening the Auto app, waiting for it to initialize the Auto simulator, and then opening the nav drawer to access the About link. The developers seem to recognize the problem and they're preparing a homescreen shortcut to speed things up a bit.

To be clear, this is a classic shortcut, not one of Android 7.1's new App Shortcuts (formerly called Launcher Shortcuts). It looks like Auto will have a card or a dialog that offers to create the shortcut. Judging by the text on most of the strings, it looks like this part of the feature simply isn't finished yet, so we'll probably see it in the next update.

Another common request for Android Auto has been the ability to use it without always having to plug in a cable. The reasons people want wireless connectivity can vary from trying to prevent wear and tear on the charging port to simply finding it undesirable to reach for a plug frequently if they're only driving a couple of blocks.

Whatever reason each person has, Google heard the requests and stated that a Wi-Fi mode would become available, and here's the evidence. The Auto team has an "engineer" setting for its team that can be used to launch the Wi-Fi projection mode. Beyond this function, there's not much else to say, but it's clear they're working on it.

Waze fans, you haven't been forgotten. Back at I/O 2016, Google declared that Android Auto would support Waze as an alternative to Google Maps. Now 6 months later, that promise was starting to feel more like a to-do written on a post-it note. While you still can't fire up Waze in the latest version, there's some evidence that there's at least some work going into it.

Right now it's just a flag to tell the system not to treat Waze as a default mapping provider, but settings like this are often added so developers don't create trouble for other developers while working on experimental functionality. That means support should be baked into the Auto app and the Waze team is now responsible for getting things in good working order.

Unfortunately, this doesn't tell us how much progress has been made, but we'll probably know more fairly soon.