We know this post is a little late to the party, especially since it's not a full review (that's coming next week). There's no point belaboring the story; the review unit was lost, or possibly never sent, so ours came alongside other customers with expedited shipping. We're not going to rush a review just to get it out on the same day as everybody else, but we still wanted to post some initial impressions and open the floor to questions. I'll try to answer as much as I can, but there will probably be some subjects better left for the final review. 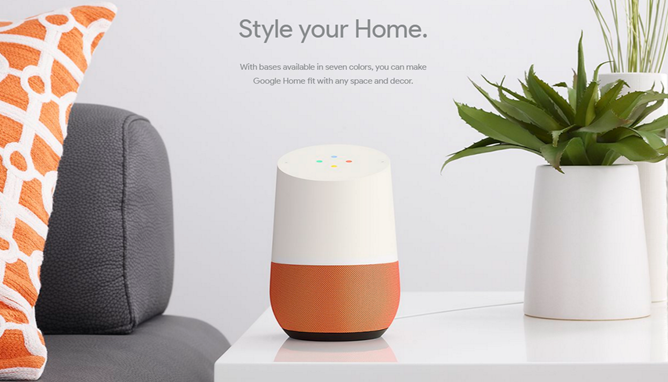 Most of Google Home's product photos portray it with a notable presence; not in the way Google's OnHub was positioned as a centerpiece, but as something that's going to stand out from everything else on your desk or shelf. It might do that, but only if you're going to fit Home in among a bunch of dark objects, or maybe if you're a fairly extreme minimalist.

In truth, Home is fairly unassuming. It's not large, but it's small. It's white, but not a pristine ivory tower white. There's no glossy or shiny spots, everything is matte. The only visually significant element is a ring of lights that convey activity, either listening or responding, and even those vanish when nothing is happening. It's clear Home was designed to be visible when you're looking for it, but remain easily overlooked and ultimately forgettable most of the time. It's Matt Damon's character in Ocean's Eleven.

Out of the box, Google Home is basically just the base unit, a few instructional cards, and a power cord. The cord is about 5.5 feet (168 cm) and has a soft rubber cable tie attached for easy management. Placement is obviously important for something that has to remain plugged in and can't be hidden away inside an entertainment center. 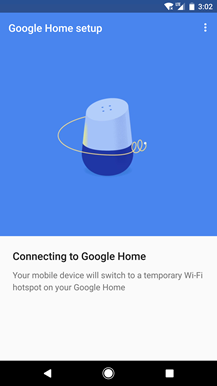 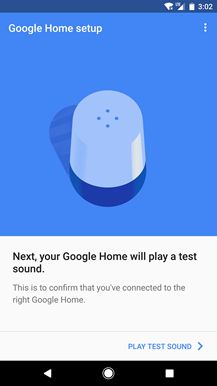 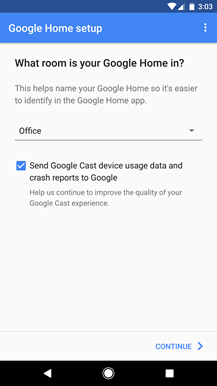 Initial setup is a combination of the Chromecast Audio setup procedure followed by a few Google assistant steps and tutorials. For most people, the first stage should only take a couple of minutes, and the tutorials might double that if you take the time to do each one. If you rush through it and don't have to download the app, this whole thing can be configured in about five minutes.

One very cool thing I didn't expect is that Google Home also operates as a Chromecast Audio, so you can send music or podcasts to it from your phone just like any other speaker.

Think about how you speak commands to your phone, or Android Wear, or just about any other device. Do you notice your volume goes up and your diction gets a little more precise? Yep, this is a thing we do naturally – but not without good reason, of course. Years of talking to phones and computers, and even watching Star Trek: The Next Generation as actors spoke up to command the computer, we've been taught to get louder when we talk to computers.

After 30 minutes with Google Home, I felt stupid for speaking louder. It wasn't necessary. The far-field microphones could reliably pick up my words in any reasonable situation, even with my voice at very low volume or music playing in the room.

After 30 minutes with Google Home, I felt stupid for speaking louder.

The speech recognition is, as we've all come to expect from Google, pretty spectacular. I can't recall any real instances when Home wasn't able to perfectly discern what I had said except for the times I stumbled over my own words.

There was one problem I stumbled across that drove me crazy: I started a hands-on video for Google Home. Yeah, I know, I didn't think it through... Google Home woke up every time somebody said "Ok Google" or "Hey Google." This wasn't just annoying, but it raises some legitimate questions about abuse. I have no doubt advertisers will inevitably try to sneak commands into TV shows and music to have products added to shopping lists or to inject something into a user's search history to set the stage for future ads. Home desperately needs personalized voice recognition.

While Google Home is a spectacular listener, bordering on near-perfect, the natural language processing has plenty of room to improve. Don't get me wrong, I'm not suggesting Home or assistant are bad, only that they aren't good enough that anybody could mistake them as perfect.

I understand the complexities and implementation details, so I'm already accustomed to crafting commands that should be easier for a computer to parse. Still, from time to time, there were little language shortcuts and phrases that didn't work out quite the way I expected.

This got me wondering how it would work with less experienced people, so I asked a couple of friends that rarely use voice commands on their phones to give it a shot with Home. There were a few hiccups and I had to explain a little about how some of the commands are supposed to work, especially things like directing videos from YouTube to play on a Cast-enabled device, but both people were reasonably proficient in a matter of minutes. There is a learning curve, but it's really not that steep.

Google Home isn't the first product of its kind and we all know it's directly competing with the Echo (and its siblings, Tap and Dot). I'll have more to say about it in the full review, but I want to make a quick comment about Alexa by Amazon. I haven't used the Echo itself, but I do own a Tap (the portable speaker with Alexa). I'm not going to do a comparison in this post, but I see no reason to beat around the bush on this. Spoiler alert, I really dislike Alexa.

Google assistant is uncomplicated and straight-forward

Google assistant (and Home) is uncomplicated and straight-forward while Alexa is frustrating. Yes, Alexa hit the market first and it has a much larger selection of "skills" and home automation integrations, but using voice to interface with it is jarring and unfriendly.

Again, I'll say more about this in the review.

You can't look at Google Home without at least wondering if it will be one of those products you're going to buy and then toss into a drawer a few months later. It's not an easy question to answer, either. This depends on how you want to use it and possibly how much extra money you're willing to invest in additional gadgets.

I made a point of leaving my newly ordered home automation toys in the box for this post, sticking to Home as a (mostly) standalone gadget. The only external devices I used were Chromecasts (regular and audio) and an Android TV. I know a lot of people aren't ready to buy into the home automation trend yet, but they want to know how much value Home can offer on its own. I'll be back to discuss the home automation aspect in my full review.

For the most part, you could read any review of Google assistant and get a pretty solid understanding of what to expect from Google Home's capabilities. Popular demos involve creating timers, adding events to a calendar, and building a shopping list (stored in Google Keep). You can also get basic answers from web search and the knowledge graph. All of these things were possible with voice commands for the last couple of years (or more). There really isn't anything new here, but now an always-on appliance can do it.

Unfortunately, there are massive and obvious gaps. You can't set reminders, send emails or Hangouts messages, or most of the things that interact with other Google services. This was a little disheartening, but I also have to wonder how often I would actually use these features. Seriously, this isn't how most people are going to use Home, so I don't want to be too harsh.

As a voice-operated remote control

Google Home begins to redeem itself when pressed to be something of a controller for music and video.

I don't have a better place to talk about Home as a speaker, so I'm going to do it here. Frankly, it's pretty good for its size. It obviously can't rival most bookshelf speakers; and the price is obviously not competitive with speakers of similar quality, but that's not really why people are buying Google Home. Nevertheless, it can actually deliver a little bit of bass and sounds much richer than the similarly sized Amazon Tap.

As long as you can connect a supported streaming service (currently Play Music, YouTube Music, Spotify, Pandora, or TuneIn), Home is very competent with music. You can control playback with voice commands that are absolutely understood while music is playing, and even control volume levels using voice commands. (I love that.)

it's really hard to pick which video you want with just your voice.

Video again shows off two huge weaknesses. First, we're really just talking about YouTube. No other video services are supported at this time. I like YouTube and watch it quite a bit, but it's not the only game in town. At the very least, I think Play Movies & TV should have been supported at launch. The other problem is one of selection – it's really hard to pick which video you want with just your voice.

I will say this, if Google could have worked with Netflix to allow people to say "play the next episode of House of Cards on my TV," Google Home would have an instant place in many homes. And largely, this is the theme of most criticisms so far: Google should have worked out more integrations right from the start. I don't want to beat this subject to death, but I will have some more to say on it later.

I'll be spending all weekend checking out Google Home and adding IFTTT and some Samsung Smartthings to the mix. The review is likely coming on Monday. In the meantime, feel free to ask questions in the comment section and I'll get to them as I can.