It's been around two months since Samsung announced the Gear S3, the third generation of its premium Tizen-powered wearable, at the IFA trade show in Berlin. Things have been surprisingly quiet since then, and certainly not so breathless as previous Samsung wearable launches... perhaps reflecting the cooling of the market towards smartwatches in general. Anyway, you'll soon be able to pre-order a new Samsung watch, and wait then wait a couple of weeks for it to arrive: pre-orders begin on Sunday, November 6th, with orders shipping out on the 18th.

The various models coming will "start at $349.99," according to the press release issued this morning. The new watch will come in "Frontier" and "Classic" versions, one with a sort of Timex look with designated numbers and divisions on the rotating bezel (above), one with a much cleaner bezel and more defined physical buttons. Both models use Gorilla Glass SR+ on the 1.3" screen, with the same 360x360 resolution of the previous model. It's a bit larger than the S2 at 12.9mm thick (using 22mm bands), and a much more expansive 380mAh battery. RAM gets boosted to 768MB, and the new models have both GPS and Samsung Pay compatibility. 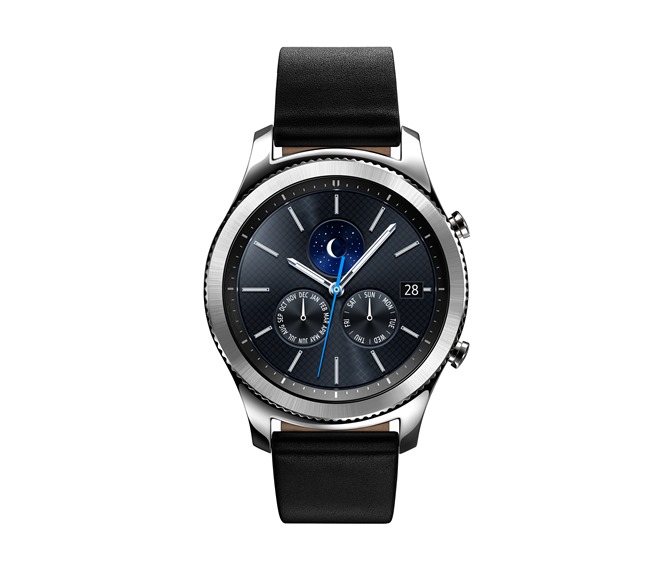 An LTE version of the watch, available only in the Frontier trim, will be released for AT&T, Verizon, and T-Mobile, presumably much more expensive than the standard Wi-Fi version available at Amazon, Macy's, Best Buy, and Samsung's online store. Like the previous model, the Gear S3 will be compatible with any Android device (including non-Samsung models) with 1.5GB of RAM and Android 5.0 or later. iOS compatibility is planned as well.

AT&T will start taking pre-orders for its LTE variant of the Gear S3 Frontier tomorrow, November 4th. You can get one for just $49.99 if you also buy a new Galaxy phone on a two-year plan, which isn't bad if you were going to get one anyway. If you'd rather buy it outright, it'll be $17.50 a month for 20 months, or $350 total... the same price as the Wi-Fi version. So yes, my prediction above was dead wrong. Not bad.

RIDGEFIELD PARK, NJ – November 3, 2016 – Samsung Electronics America, Inc. today announced the forthcoming preorder availability of Gear S3 LTE and Bluetooth models, a striking and innovative smartwatch that further solidifies Samsung as a leader in connected wearables. The cutting-edge timepiece will be available in two designs – the rugged Gear S3 frontier, and the sleek Gear S3 classic. Starting at $349.99, Gear S3 will be available at retailers including Best Buy, Amazon, Macy’s and Samsung.com, as well as participating wireless providers.

“Consumers are increasingly recognizing the benefits of a smartwatch that operates even without their phone,” said Gary Riding, senior vice president of Product Marketing at Samsung Electronics America. “With the LTE capability of Gear S3 it is easy to make or receive phone calls and read or reply to texts and notifications, so they can stay connected while leaving their phone behind.”

Available in two designs, “frontier” and “classic,” and featuring the distinctive rotating bezel, the Gear S3 joins Samsung’s diverse portfolio of wearables. The Gear S3 showcases a design perfected by Swiss watch designer Yvan Arpa. The sophisticated design is combined with IP68 water and dust resistance1 and military-grade durability to protect against extreme temperatures, scratches and impact, making it the ideal smartwatch for the toughest conditions. Consumers can also customize their Gear S3 to fit their lifestyle or mood, thanks to thousands of available watch faces and the ability to swap out the band for any standard 22mm offering.

The Gear S3 puts convenience at your wrist, with Samsung Pay providing the ability to make mobile payments virtually anywhere you can tap or swipe a credit or debit card. With Magnetic Secure Transmission (MST) and Near Field Communication (NFC) support built-in, Gear S3 users will be able to make a purchase with Samsung Pay which is widely accepted across the U.S. Samsung Pay on Gear S3 protects credit card information with the same advanced security as Samsung Pay on a Galaxy phone, using tokenization, Knox and PIN protection.2

The LTE version of the Gear S3 frontier enables wearers to receive calls, texts and alerts, listen to music, track fitness routes or download apps even when their phone isn’t nearby. With all models featuring a built-in speaker and microphone, even the BT version allows consumers to make and answer calls – without ever having to reach for their phone.3

Built-in GPS adds to the connectivity, empowering wearers to easily monitor their daily fitness activities and share their location with friends or in the event of an emergency with safety functions like the SOS feature. The S Health app makes it simple to not only track activity and heart rate, but also to set goals, post results and check leaderboards

Used as a standalone device, or as part of the Samsung Galaxy ecosystem, the Gear S3 offers an all-in-one wearable experience that seamlessly fits into – and enhances – any lifestyle.

The LTE4 version of the Gear S3 frontier will be available from AT&T, T-Mobile and Verizon. Wireless providers will share availability and pricing.

Amazon Rapids is a $2.99 subscription for short kid stories written as chat conversations

OTA updates rolling out to the SHIELD Tablet and Tablet K1 with Vulkan API patch, a boot loop ...