Apparently developer Niantic thinks that what Pokémon GO is missing is daily rewards. You know, the paltry bonuses that are thrown around free-to-play games to keep players invested on a daily level so they'll hopefully come back and spend some actual money. The next major revision of the game will give you 500 experience points and 600 Stardust for catching one critter a day. Do it every day for a week and you get an extra 2000XP and 2400 Stardust. Similar bonuses will be given out for consecutively visiting Pokestops, with items replacing Stardust. It means that low-level players can get at least some progress every day without being forced to take over the nearest gym for ten minutes before rapidly claiming some coins. 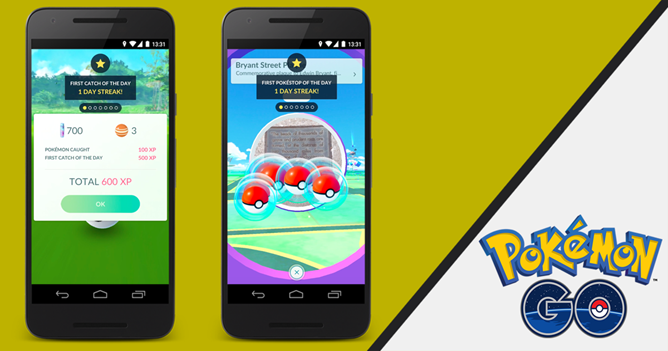 Okay. Will any of this actually help you catch the rare Pokémon in your area? It doesn't appear so. Will it help reduce the grind for candies that it takes to make your current monsters competitive at the local gyms, which are now more or less ruled by people with unlimited free time (when the hackers don't have them beat first)? No. Okay. So I don't actually have a reason to open the game for the first time since August. Right, just so we're clear.

Normally an everyday app update post isn't the place for this sort of editorializing, but I'll be honest, I'm getting kind of desperate. Since apparently a ton of Reddit threads, comments on stories all over the Internet, and endless replies from players on Twitter, Facebook, and Google+ haven't done the trick, I'm going to try one last Hail Mary pass here on a notable mobile blog:

Seriously, Niantic, bring it back. It was featured in the pre-launch video, along with a ton of other features that haven't been seen since. It worked for the first two weeks of the app's availability, then borked out. You stripped it out of the app entirely a couple of weeks later, and since then have made vague promises that it will return in some neutered fashion. So far only San Francisco in the US, out of the dozens of countries with hundreds of millions of potential players you have access to, has seen any kind of improvement. Taking Pokémon for a walk helped - at least now we can spend hours and hours powering up a monster, instead of weeks. But we're still only given a vague indication of what's actually around us, offering fleeting hope that perhaps we might be able to find something useful in any direction within a kilometer or so. With the fan-made tracking apps shut down and the Pokestop-based hunting tool apparently exclusive to the Bay Area forever, players are resigned to endless wandering. Or of course, closing the app and finding something else to do. Apparently enough have chosen the latter that Niantic felt it necessary to lure them back.

I feel like I shouldn't have to explain this to game developers with years of experience, but players need a goal to achieve to motivate them forward. In RPGs it's advancing the story. In strategy games it's discovering new tactics for victory. In Minecraft it's finally completing that 2000-foot scale model of your own genitals in blocky bronze. In Pokémon, it's catching freakin' Pokémon. Every obstacle in front of that goal gives players one more reason to walk away, and removing the number one tool for completing it is poison for gaming enthusiasm. Niantic, you've been doing everything possible except the one thing that your game needs to actually survive long term: returning its most crucial element from launch. The tracker doesn't have to be perfect, and it doesn't have to be exactly what it was before. It just needs to be here, immediately. Without it, the loss of player engagement that I assume you're reacting to will continue unabated, and Pokémon GO will join the annals of short-lived mobile fads like Flappy Bird and Draw Something before the year is out.

It worked once. Make it work again. Niantic, stop whatever else you're working on and bring back the tracker before you squander the biggest gaming opportunity in smartphone history.

DC Legends is now available for Android from WB Games