Connecting a PC to a television isn't exactly a revolutionary idea. Ditto for a mobile device - it's harder to do now that dedicated HDMI ports are gone, but streaming screens and content via Chromecast has sort of filled the gap. Jide, the company behind the intriguing Android-as-desktop Remix OS products, is trying to take that rather niche idea mainstream with its latest hardware. The Remix IO is a gadget that's equally comfortable on your desktop or sitting inside your entertainment center. It's up on Kickstarter now for as little as $99. 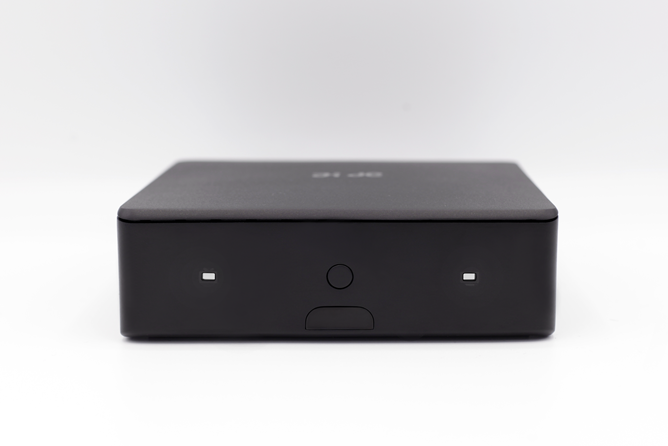 The IO is basically a mixture of the Mini PC gadget that we reviewed last year, and a more conventional set-top box. When using it in desktop mode users will have access to the now-familiar Remix OS, complete with its desktop-style windowed interface running Android applications from the Play Store. A mouse and keyboard are the best way to interact in this mode. But if you move it to your television (or simply open the launcher or applications in TV mode), it suddenly becomes an Android TV experience, with the same app interface that you'd get on something like the Nexus Player or SHIELD TV. There's a lot of custom software going on in the background - for example, while apps like YouTube and games launch with their Android TV interfaces, there's no Leanback launcher. IO uses a custom "TV Mode" launcher instead.

In addition to the usual fullscreen video applications, Remix IO has a big focus on TV gaming. Using it like an Android TV box with the included remote or a Bluetooth controller works just as you'd expect it to. But because the box can also install standard mobile Android games (even playing them in dedicated windows in PC mode), it also has access to those mobile games in TV mode. To help ease the transition between touchscreen controls and the hands-off interface, there will be a built-in control mapper for dedicating touch controls to a physical controller and/or a keyboard and mouse combo, a la the original stand-alone NVIDIA SHIELD.

If there's a weak spot in the IO, it's the hardware. According to the Kickstarter page, the box uses an RK3368 CPU octa-core processor running at 1.5GHz paired to 2GB of RAM... which isn't going to impress anyone who's been looking at the SHIELD TV. 16GB of storage is anemic for anything billing itself as a game console, though users can add storage via a MicroSD card slot (and presumably set it to adopted storage, too). Even with these ho-hum technical specs, Jide says the Remix IO can handle 4K video just fine... we'll see. When it's ready to ship to backers in March, the IO will be running Android 7.0 underneath the Remix interface.

Other hardware features include standard built-in Wi-Fi and Bluetooth, both HDMI and VGA outputs for easily connecting to monitors and TVs sans adapter, four standard USB 2.0 ports for mice, keyboards, and storage, and an Ethernet port. (Oh, and it has a headphone jack. Of course.) The standard model is going for $99 with a TV remote in the early bird special on Kickstarter. If you want just one, this is the tier you want to get in on, because the next option is two IO boxes and two remotes for $169. (Not bad, but unnecessary for most.) At the $299 level backers can get a developer kit, which includes both a standard consumer Remix IO with a remote and a developer board. Developer kit owners also get access to the customized SDK and to Remix's app recommendation gallery. A $350 backer level offers five standard Remix IO boxes at a $150 discount.

The project is certainly intriguing. Jide has proven that it has the development chops to make Android work surprisingly well in a desktop environment - it's even begun partnering with conventional manufacturers to start selling Remix-powered desktops and laptops. And the original Mini PC, though somewhat lacking in power, delivered upon its Kickstarter promise.

That said, devices that bill themselves as Android-powered game consoles have a rather spotty history. Despite the best efforts of many OUYA turned out to be a bust, as did the MadCatz MOJO. Though the SHIELD is excellent, it needs all the help it can get from NVIDIA with exclusive titles to shore up the comparatively tiny selection of games available to Android TV. Perhaps Jide's approach, supporting both Android TV-formatted games and standard mobile games with mapped controls, will work out slightly better. We'll have to wait and see.

Remix IO is scheduled to ship to backers in March of next year, though as always with Kickstarter projects, there may be significant delays as production begins. The campaign started today and has already raised $120,000 of its quarter-million dollar goal, so it should definitely be funded by the end of its 30-day funding period. Hopefully they'll add an option for single purchases after the early bird special is sold out - there are a little over 700 spots left on the cheapest tier.

A couple of weeks after the initial announcement of Remix IO, the Kickstarter is nearing double its pledge goal. But what's really encouraging is that Jide is taking some of the feedback it's received from its backers (and news posts like this one!) and decided to offer an upgraded model with better specs. The Remix IO+ has a slightly faster RK 3399 processor running at 2.0GHz, doubles the RAM up to 4GB, offers 32GB of onboard storage instead of 16GB, two speedy USB 3.0 ports along with two more USB 2.0 ports (no Type-C), and the Ethernet port now supports gigabit speeds.

The beefier Remix IO+ is being offered for $129 with a remote, $30 more than the early bird special, which seems more than reasonable. It has a slightly later shipping date, May of next year. Anyone with a current pledge can switch to the Remix IO+, or any of the more expensive multi-unit backer tiers, before the campaign ends on November 19th.