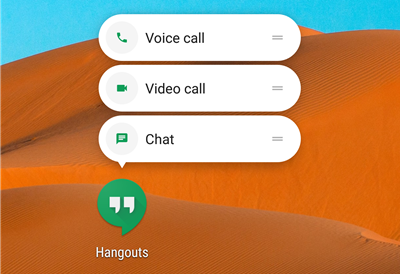 If you're walking around with one of the few phones already running Android 7.1, or if you're using one of the third-party launchers that supports static app shortcuts, you can now skip straight to one of three modes of communication offered in Hangouts without even opening the app. The shortcuts are: chat, video call, and voice call.

The list of options was fairly predictable since they were already visible in a teardown of Hangouts v13, but the shortcuts were specifically disabled until v14.

While we're on the subject of Android 7.1, it has been pointed out that Hangouts v14 does not include Image Keyboard support. After spending two versions adding emotes like /dealwithit and /flowerbeam, I have to /disapprove.

Changes to setting up group chats 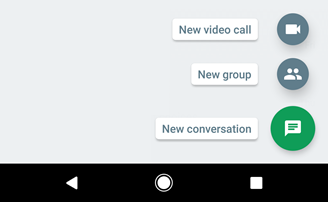 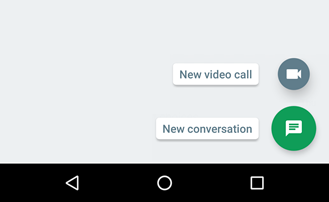 Group chat has been supported ever since Google Talk was given a Holo facelift and rebranded Hangouts. When the Material redesign came along, it brought with it a FAB (floating action button) containing a button to begin a new group chat. 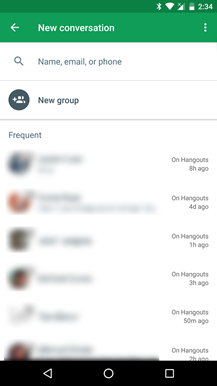 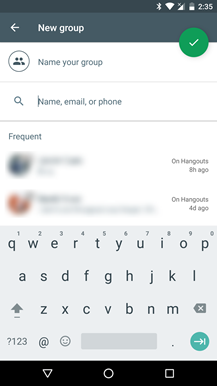 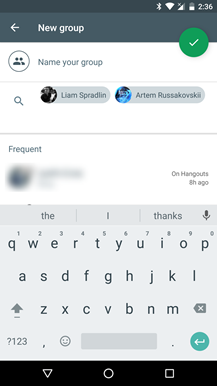 With Hangouts v14, that approach to beginning a group chat has been replaced. Instead of hitting the FAB and looking for the 'New group' button, just hit 'New conversation.' At the top of the conversation setup screen, there's now a 'New group' button. Tap on it and the top search row will animate down to cover the group button, revealing a field where you can name your group. From here, you can select participants for your group as you like.

Alternatively, you can leave your list of participants blank and create a group with just yourself. This is handy if you want to share a link people can use to join the group at their discretion. Thanks, Kyle Salewski.

Reorganized menus and settings in chat 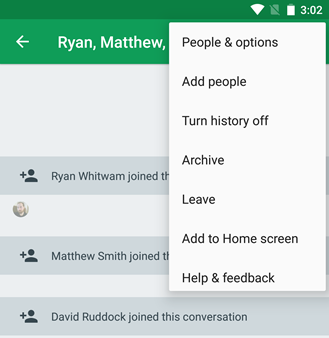 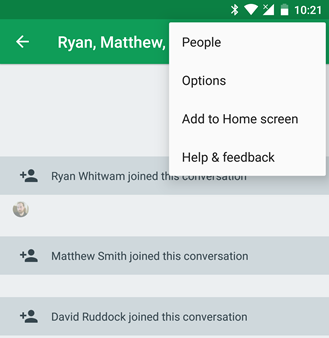 The chat screen itself is effectively unchanged, but the overflow menu has been altered quite a bit. To begin with, 'People & options' has been broken up into two separate commands titled 'People' and 'Options,' each opening their own individual screens. The rest of the list is much shorter in v14 thanks to the removal of several commands: turn off history, archive, and leave. If you're in a group chat, the 'add people' command is also gone, but 1-on-1 chats still have their 'create new group' command. Don't worry, these features aren't gone, they've just been split up between the two new screens. 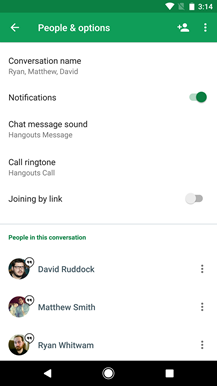 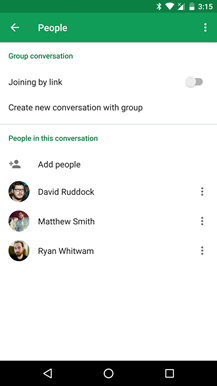 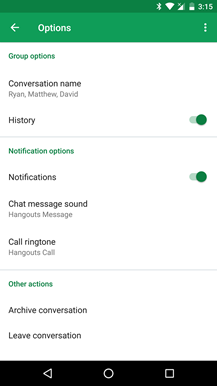 The 'People' screen contains the toggle to enable joining by link, the participants, a button to add people, and a brand new command to start a new group based on the members of the current group. There's also a new 'block' command in the overflow menu next to each participant, should it become necessary.

Everything else was moved over to the 'Options' screen, including the group options to set a name and a toggle for history, notification options and sound settings, and the commands to archive or leave the conversation.

This move was probably intended to remove any commands from the overflow menu that probably didn't get much use and could be annoying if they were tapped accidentally.

The Lenovo Phab2 Pro is now available for purchase, won't ship until December