There's a new Harry Potter spinoff hitting movie theaters soon, in case you haven't turned on a television, surfed the web, or looked at a billboard in the last few months. And because Warner Bros. isn't interested in making a new movie without the potential for yet another billion-dollar set of sequels, they're pulling out all of the stops for the marketing for Fantastic Beasts and Where to Find Them. That includes some new Easter eggs (do wizards celebrate Easter? Maybe chocolate frogs or something) in Google Search, Maps, and the upcoming Daydream VR platform.

The first bit is the simplest: a new set of "spells" (voice commands) in Google Search can control some basic functions on your phone. Say "OK Google" or hit the microphone icon in Search, then say "lumos" or "nox" to turn your LED flashlight on or off. "Silencio" will mute the phone's notifications and ringer. Oddly, those seem to be the only enabled commands so far - I tried "petrificus totalus" to crash my Nexus 6, and "expecto patronum" to summon a spectral duck to clean my kitchen, to no avail. 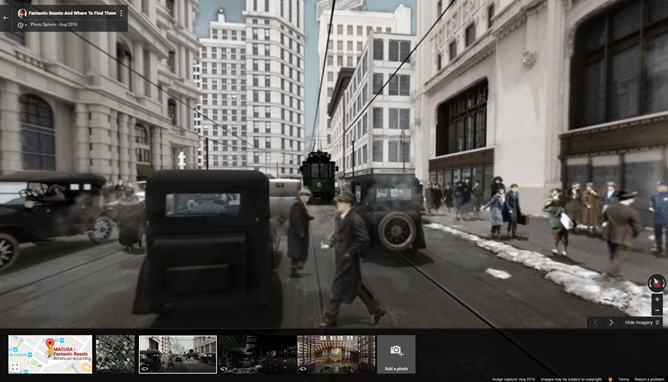 One of the more interesting aspects of the new Fantastic Beasts movie is that it's a period piece, taking place in New York in the 1920s. The setting mixes semi-authentic historical locations with the more whimsical aspects of the Harry Potter universe. If you'd like to check out some of the sets (or approximations thereof), various real-world locations in Google Maps now have fake 1926 variants that tie into the film: the Magical Congress of the USA on Broadway, the Blind Pig tavern, the Steen Bank at 14th and 8th Avenue, and the home of the Goldsteins near Madison Square Park.

The coolest bit of this partnership is exclusive to Google's Daydream VR system, so it's also exclusive to the Pixel phones for the time being. We saw a preview of this game at Google's Pixel announcement event: a VR game with a wand controller that lets players explore the case and magical gadgets of film protagonist Newt Scamander. Obviously this will have to wait for the Daydream View headset to land later this month. For something a little more pedestrian, Google's new Allo messaging system will get custom Fantastic Beasts sticker packs sometime in the future.

You can find quick links to all the movie tie-ins across Google's services here.

Reckless Racing 3 is the latest Play Store game to go on sale for $.10 in some countries