The Google Messenger app officially hit version 2.0 yesterday. There are plenty of changes, largely related to visual tweaks like a new launcher icon, color changes, and some revised layouts. While a mostly visual release, there are some functional improvements, as well. A teardown also brings a good look at some interesting things in the future of messaging. 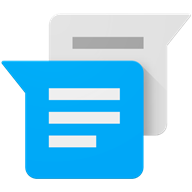 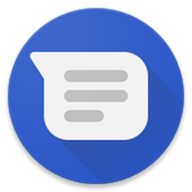 The first thing you'll probably notice with this update is a new icon; and it's round. Everybody knows Google is gently nudging people in the direction of circular icons, starting with the Pixel Launcher and built-in support with Android 7.1 Nougat. The thing about this initiative is that it's still largely optional for both device makers and app developers.

However, the Messenger app is taking this a bit further by completely abandoning its freeform shape for a single message box on a round background. What's interesting is that the version of Messenger that originally shipped with the Pixel handsets actually includes both the original icon and a round version closely resembling the new version, but with a lighter shade of blue and the message box has slightly sharper rounded corners.

The notification icon has also been adjusted to match the new launcher icon.

We often joke that iOS has nothing to hold over Android, but there actually are a few little niceties Apple users normally have to give up when they jump ship to Android. A simple, albeit widely recognized example is the Calendar app icon that changes to reflect the current date. Google delivered that functionality with the Pixel Launcher, and now it's doing the same with unread counts on launcher icons. 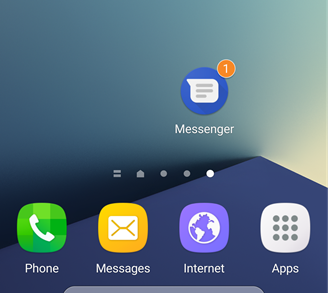 Unread count showing up on a Galaxy S7 Edge.

The v2.0 update to Messenger adds the ability to post an unread count badge on itself for a half-dozen OEM and third-party launchers. Based on a list of permissions found during a teardown, it appears reasonably recent phones from Samsung, HTC, Sony, and Huawei should be supported. It should also work with two third-party launchers: Apex Launcher and Solid Launcher.

The list of supported launchers could obviously grow over time, but this appears to be the list for now. Somewhat surprisingly, Messenger doesn't offer unread counts on the just-released Pixel Launcher or Google Now Launcher, though it's possible these two simply don't support badges. (Note: some launchers like Nova Launcher already display unread counts with other methods, thus Messenger doesn't need to support them explicitly.) 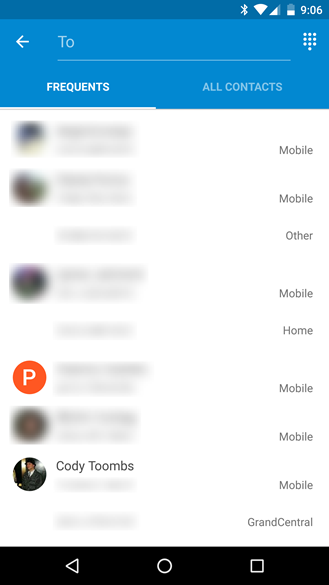 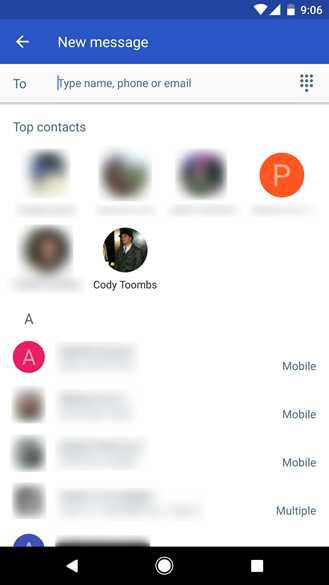 Stepping into the app brings some welcome improvements. The new version merges the top contacts with your full contact list into a single page rather than splitting them up. The top eight are distinguished by a round avatar with a name below while the regular contact list remains the same.

Contacts with more than one number will now be listed as having 'multiple' methods for contact instead of stacking numbers like the old version did. This might add a tap, but it seems a bit easier to parse without the gaps between contact photos. 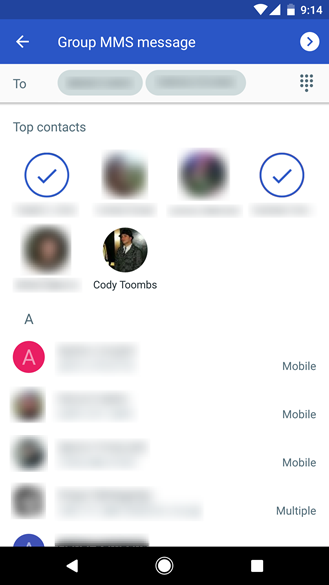 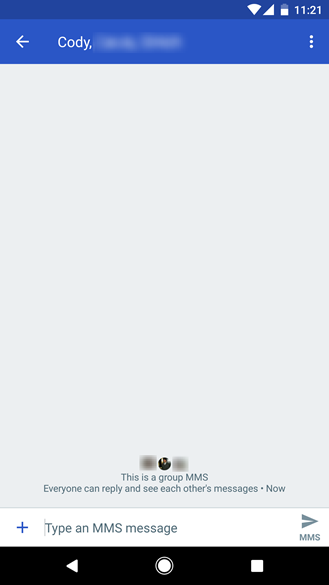 The contacts screen leads into a more fluid experience for group messaging. In previous versions, tapping on a contact immediately opened up a chat window. If you wanted to add more recipients, it meant hitting a button at the top left and picking another person.

The new interface is designed with the assumption that group chats are going to be more common. Tapping a contact will now switch their photo to a checkmark and add their name to the list at the top of the screen. Hit the arrow button at the top right when you're done picking recipients and the group is ready to go. The group chat window also includes small avatar photos of the participants, mostly so you're not staring at a blank window right away. 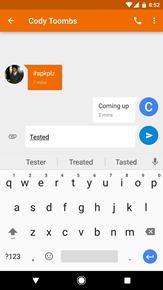 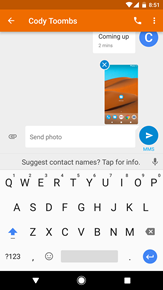 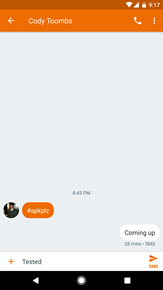 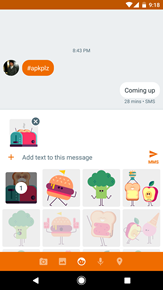 Another little visual change with a purpose was made to the messaging interface. The 'Send' button will now always show what type of message you're about to send. In the past, if the outgoing message could be sent as an SMS, the button simply looked like an arrow on a blue background. The icon switched to show "MMS" at the bottom if the message included an image, audio file, or video, or if the message got too long, or if group messaging was enabled. The latest version throws out the discrepancy and always shows SMS or MMS, depending on the situation.

If you already know how SMS and MMS work and why each is chosen for a given purpose, this probably won't make much of a difference, but it's probably a helpful clue for anybody confused by these distinctions. On the other hand, maybe the occasionally appearing MMS label was raising more questions, so Google opted to always show text so the changes wouldn't be as obvious. 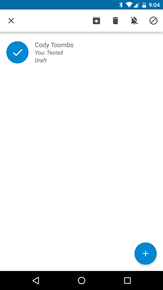 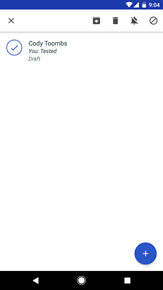 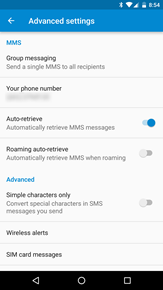 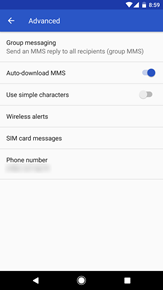 As mentioned above, there are also a number of visual tweaks. The main color for the app has been changed to a different shade of blue. There are some new icons for various tasks like selection marks, sending messages (pictured earlier), and a few other things.

There has also been a reshuffling of the Settings and Advanced Settings screens. The options remain mostly identical, but they may be named slightly differently, have different descriptions, or appear in a different spot on the lists.

Google acquired a company named Jibe Mobile last year in an effort to get a jumpstart on bringing RCS to Android. Rich Communication Service (RCS) is a messaging protocol intended to replace the decrepit SMS and MMS protocols, adding support for things like emoji, location sharing, file transmission, and more. This probably sounds quite a bit like Allo; but just because one messaging app can do these things, it doesn't mean others shouldn't. Google has been promising Jibe and RCS for a while, and now it's getting ready to add support to the Messenger app.

As far as the evidence goes, this one is about as obvious as it can get. There are about 100 lines of text and quite a few entries from the Android manifest. Jibe is mentioned in a number of names, as are features known to be a part of the RCS spec, including group chat, typing indicators, and messaging over both WiFi and cellular data connections. These will be collectively referred to as "enhanced features" and will be advertised to users as a way to "do more with Messenger." However, there is a requirement that battery optimizations must be disabled for RCS to work properly (which is a must if messages are going to appear quickly after they are sent). Turning on RCS will require a short setup process involving an activation code sent via SMS, just like Allo.

Group chats appear to be fairly mundane, largely matching Hangouts in their implementation. Any user in a group chat can send an invite to another person. Once somebody is in a group, all of the members are notified. Anybody can leave a group if they choose to, but nobody can be kicked out.

It makes plenty of sense to support RCS in Messenger given that it has a considerable head start on Allo and will likely remain in the lead for the foreseeable future.

There's no way to enable RCS in Messenger quite yet, but the fairly extensive text and supporting code suggests it might be ready to launch with this version. Additionally, the RCS service is actually already showing up in the memory usage screen, suggesting Google may be planning to turn it on at any time. 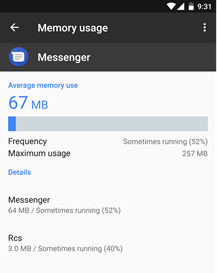