Google Photos is great (speaking personally, it's one of my favorite Google products), but there's always been one thing wrong with it: albums were not included in search results. Say I search for "cats" (I have a lot of photos of my cats). The photos in the albums would be included, as well as items found by object recognition, but the album with my cat photos would not be included. Google has now fixed this anomaly, causing the album itself to be included.

After force closing the Photos app and clearing data, this comes up on my Nexus 6P. It's pretty much that - if you search, Google will bring up relevant albums as well as relevant photos. This uses both the name of the album and location data (if applicable) and machine learning for object or face recognition. This also works on the web app in exactly the same way. 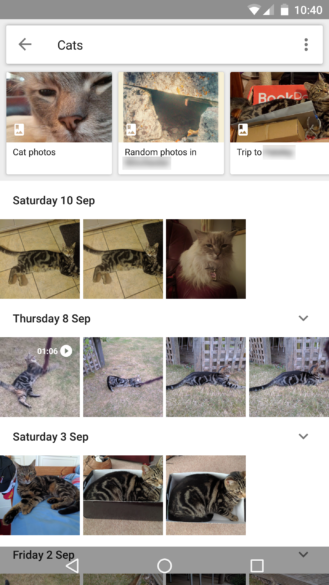 Main image and above: albums are now included in search results.

This is probably a server-side rollout - as I said above, I initially didn't have it, then force-closed and cleared data, which enabled the feature. The latest version of Photos for Android is version 2.2.1.136513178, which you can grab at APK Mirror if you don't already have it. Otherwise, Google Photos is available on the Play Store.

Solitaire: Decked Out is a delightfully designed, free, and ad-free take on the solitaire game