Offering developer previews is very beneficial to a platform, but it also comes with its own perils. For example, people get upset when a feature that was part of the preview is dropped before the final release. Google has been derided in many a comment section for the removal of night mode in the final Nougat release, and now the hacky night mode enabler apps don't even work anymore. Is Google doing this because it hates you personally? That must be it.

Night mode in the Nougat dev preview and night light in Android 7.1 do the same basic thing. They shift the color of the display toward the warm end of the spectrum, reducing the amount of blue light emitted. Research has indicated that exposure to blue light in the evening can negatively affect your sleep because your brain thinks it's daytime.

Google removed night mode from Nougat because the version in the dev preview was apparently not working well enough. However, the triggers for night mode were still available in the System UI tuner, they were just hidden. A number of apps came along that could re-enable this hidden feature. We've confirmed those won't work in Android 7.1 with night light, though. 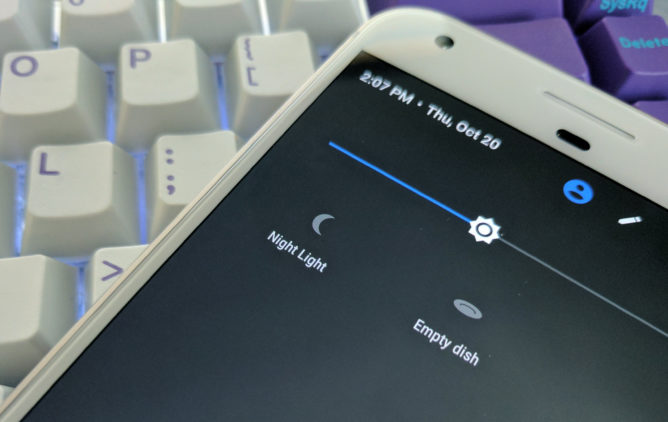 Google is using a new hardware composer interface to change the color of the screen rather than a simple GL shader like it used in the N preview. So, that loophole to enable night mode is closed for good in 7.1. Only devices with the necessary hardware and driver support will have night light.