For many a year, Android users have been seeing a familiar dialog saying 'Android is upgrading' when the operating system updates or in the event a new ROM is flashed, stopping them from using the device until it has finished optimizing apps. Those days are over: with Android 7.1, the 'Android is upgrading' process is now carried out in the background.

In 7.0, this dialog was sped up considerably - as Ryan says, it's almost instant. However, the Android team has gone one step further and removed it completely in 7.1, allowing the process to be carried out mostly silently, apart from a notification in the shade telling you it's doing this, and a progress bar indicating how far it is from complete. Regardless of whether a device uses the new seamless updates procedure, if it runs 7.1, it will see 'Finishing Android update' in the shade after updating the OS. This was confirmed by +Ian Lake on Google+. 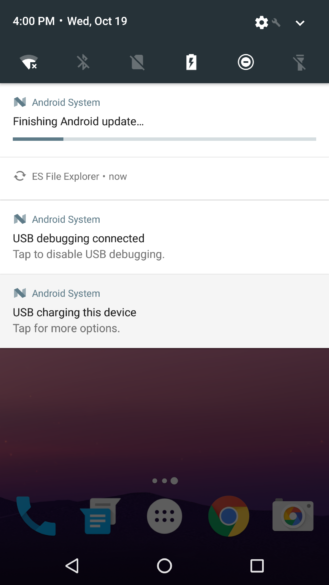 It's not massive or game-changing, but just more polish that Android is getting to make it into a more complete, refined operating system. That's what we love to see here at Android Police.