The stage darkens, smoke pours out of an opening on the catwalk as bright blue lights franticly converge on a point. A man dips his head as he appears over the oddly low ramp, and jogs onto the stage.

That's YT Jia, LeEco's founder and CEO. He runs the LeEmpire (sorry), and his entrance was preceded by a video montage that included his face peering out of a wall of fire and sparks. To say that LeEco practices hero worship of its creator would not be a stretch - I have a feeling there's something approaching a cult of personality around this man in the company. I'm not judging - it's his company - but it really crystallized to me just how bizarre and bombastic LeEco's presentation felt at times today. 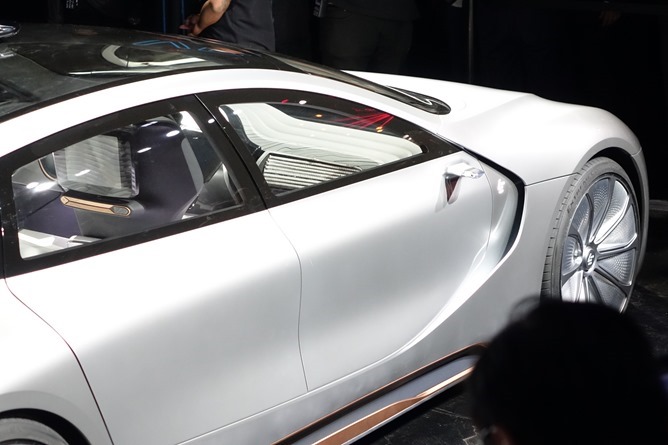 LeEco's LeSee car was the darling of the event, despite being the one non-working product demonstrated.

Now, YT jogged onto the stage allegedly because LeEco's LeSee autonomous vehicle was in a serious accident when it was being transported from Los Angeles to San Francisco (it's unclear if the car itself was driving, or if it was on a rig). LeEco had planned to show the car driving around a race track, then for YT to be driven by the car up this oddly low ramp (makes sense now, right?) and emerge, to prove the mettle of LeEco's self-driving ambitions. That didn't happen. A backup prop car was brought in via air freight from London, but it was a nonfunctional concept. That concept had previously been used in filming for the next Transformers film - a placement that no doubt cost LeEco dearly. 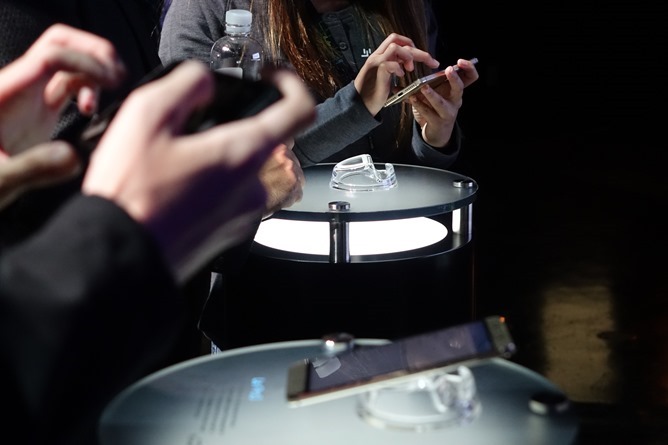 You see, there is no question that LeEco lacks money. They have lots of it. LeEco paid to fly dozens, possibly hundreds, of journalists, YouTubers, influencers, and analysts up to its San Francisco US launch event. (Disclosure: LeEco paid for my flight and one night in a delightful nautical-themed hotel in San Francisco. They also fed me some delicious steak skewers.) They paid to rent out Innovation Hangar and much of the Palace of Fine Arts in San Francisco for half the day. It was an affair, and LeEco absolutely took advantage of this captive audience to pitch its full corporate narrative.

The thing is, much of that narrative fell on deaf ears. With every concentric circle diagram and pyramid flow chart, eyes glazed over, heads went down to phones or laptops, and a general sense of disinterest seemed to infect the audience. I'm sorry, LeEco: no one cares about your "ecyosystem," no one wants to understand what your products mean to our lives, and there is absolutely nothing we would like to hear about less than how vertically integrated you are. I can put up with a bit of bloviating in a press conference - it's to be expected - but LeEco's meaningless corporate-speak permeated its entire presentation from start to finish in a way that became genuinely annoying as time went on. 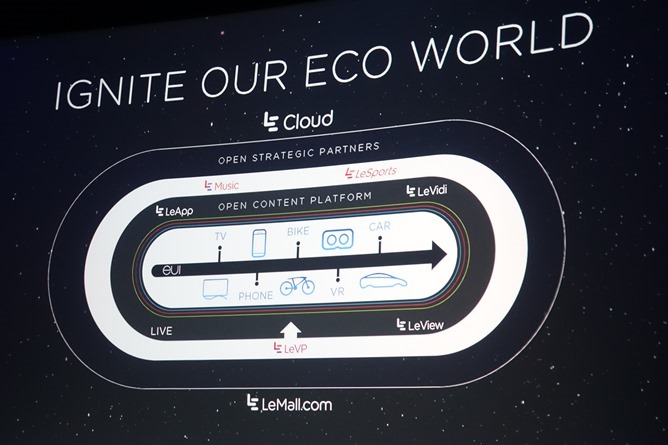 One of LeEco's many completely nonsensical infographics

I would much rather have been subject to a monotone recitation of features and technical notes than listen to LeEco talk about just how great, amazing, and different LeEco is. Show me - don't tell me. Trapped in the hour-and-a-half of masturbatory self-praise was a solid 30 minutes of product discussion. This was rather disappointing to me, because I feel not only did LeEco bore its audience, it failed to make a coherent case to consumers as to why its products are relevant and compelling. Instead, it talked about a self-driving car you can't buy, that may never go on sale, and that has exactly zero technical transparency to prove it's even a viable product. Meanwhile, the very real, very soon to be available smartphones got little more than a brief specification and pricing rundown. The same went for the TVs. 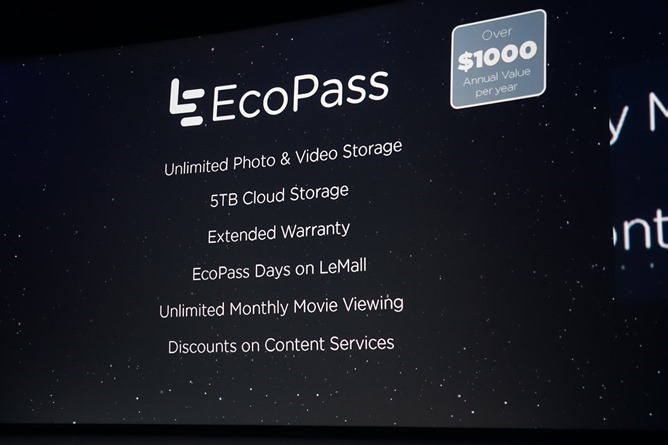 The EcoPass is the linchpin of LeEco's US ambitions... and we only got a taste of its benefits.

And that is the frustrating part: its products could very well be compelling! It maddens me that a company which is clearly prefaced on providing extensive value to consumers instead used the limelight to try and turn dollars, cents, and silicon into a big corporate ego stroke. LeEco, no American consumer has any concern with your values and philosophies - they just don't. It's not important, it's not relevant, and it makes you look like you have something to prove but that you're having trouble doing it. 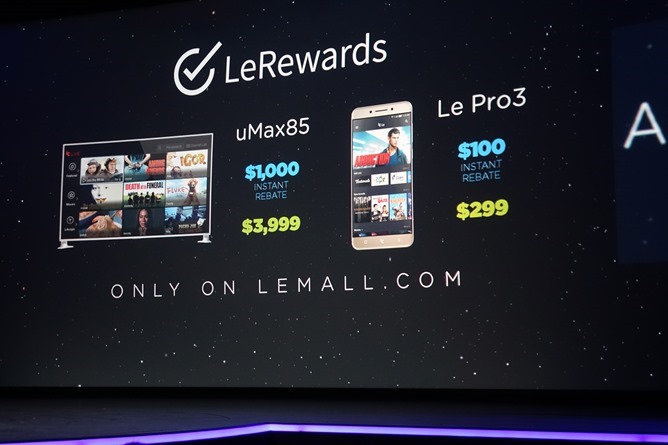 LeEco's $149 smartphone could well be the breakout hit of the holiday season - it actually looks pretty good. Sure, the EUI interface is... a bit tragic, but when we're talking about smartphones as a commodity, that's really less relevant. Its EcoPass might actually be interesting, too, but LeEco only gave us a taste of the value package they intend to offer - it wouldn't even tell us how much it costs. We know you get 5TB of cloud storage, unlimited photo and video backup, a two-year extended warranty, and LeEco's streaming video offerings. You'll probably also get a discount on Netflix, Hulu, and other video streaming services (a LeTV product person let this slip to me), which, again: neat! Do I think LeEco's chances of making this work in the US are very great? No. But I think it's still interesting. And yet, this was such a comparatively tiny part of LeEco's overall presentation. 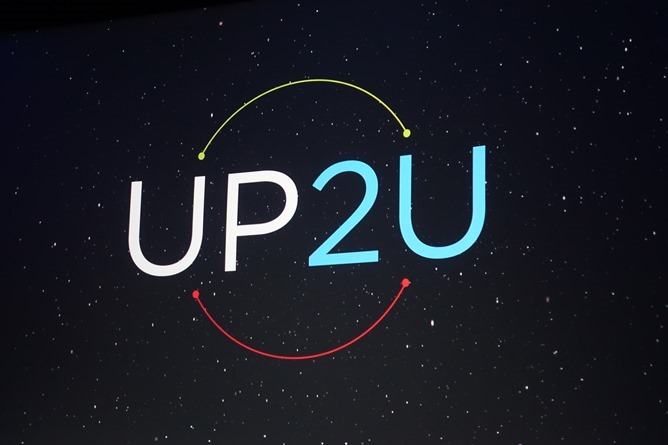 UP2U is an early product testing program and feedback forum, but LeEco consistently tried to tell me it was a "brand philosophy" instead of just explaining what it was.

It's clear LeEco has a lot to learn about working and marketing in the United States. I'm curious about their products, but I left the event feeling frustrated that I really didn't have enough information about their pitch to get it. The full picture will, allegedly, be unveiled on November 2nd when pre-orders start. But as grand entrances go, LeEco's seemed far too concerned with looking the part than actually delivering on the goods. 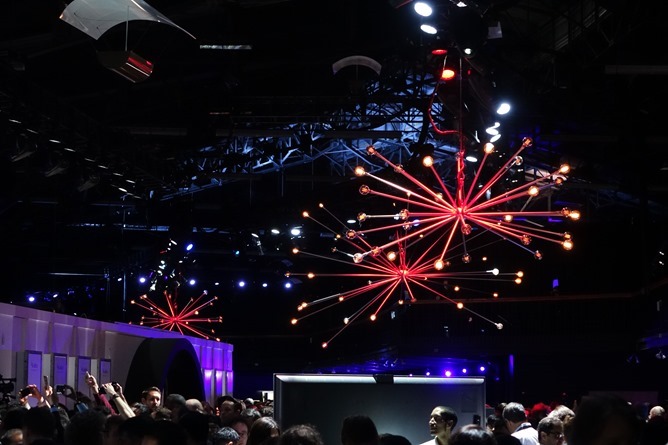 If you're looking for the specs and the tech details, here's the rundown of everything LeEco announced at the event.

LeEco's big US launch starts with a bike, phones, LeCloud, TVs, and more