So far there are only two devices that officially support Google's neat-o Project Tango spatial detection technology: the original developer kit (no longer being sold) and the shiny new Lenovo Phab 2 Pro. The latter is set to release next month, so Google is preparing the way with a new first-party app, simply called "Tango." It's available as a free download in the Play Store right now, but without access to either the tablet or the phone, you won't be able to play around with it.

Based on the screenshots, it's a mobile version of No Man's Sky, hopefully without the disappointment. The description offers a little more contextual information: the app is a listing of other, more interesting Tango-compatible apps that users can download through the Google portal. So it's basically a showroom for this interesting but somewhat niche tech. There's a previous Tango AppDiscovery app with much the same function, but it's geared towards developers using the dev kit hardware, along with the other Tango Experiments apps. 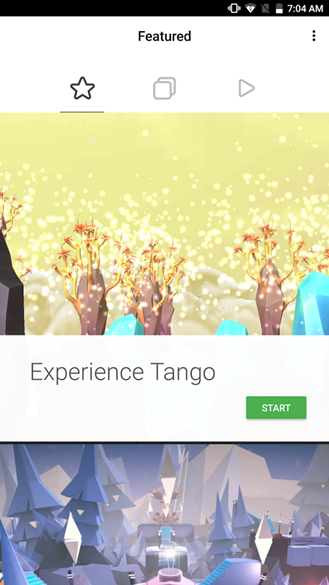 At the moment we don't have any information on other Tango-equipped phones or tablets coming to market any time soon. Lenovo probably wants to gauge reactions from the Phab 2 Pro before committing to any other devices, and there's no indication that other manufacturers are interested at all. Perhaps getting more user-friendly Tango experiences out in the wild will help. Pixel orders are starting to ship from the Google Store