According to the Google Play developer content policy, Google wants to build "the world's most trusted store for apps and games." With this in mind, the company has updated the developer policy with examples of things that will get your app removed from the store, such as sexually explicit material, excessive graphic violence, or use of drugs, plus some 'metadata' app listing items which are now not allowed.

The listing is an important part of how an app is promoted to customers. With this update, Google presumably wants to try and take away some of the more 'clickbait' listings that it deems unsuitable, or in the case of wholly inappropriate content, which we've copied and pasted below, remove completely.

Here are some examples of inappropriate text, images, or videos within your listing:

To be clear, these items cannot be in your app listing. As well as the above, there are other examples of metadata which cannot be found in an app listing from here on out. 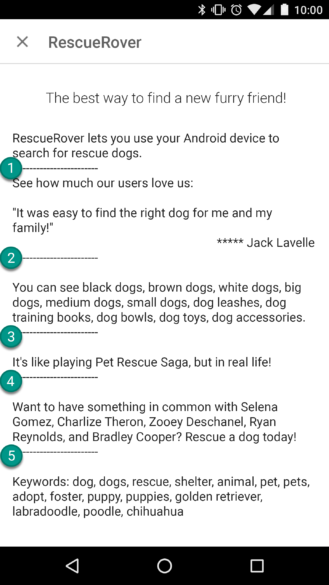 Developers, it is probably a good time to review your app listing and make sure it doesn't violate any of the new policies. It is most likely the extreme minority that does, but if Google is trying to improve the Play Store for everyone, we are all for that.