Google promised a developer preview of Android 7.1 before the end of the month, and here it is sooner than you might have expected. Android 7.1 ships on the Pixel, but now you can try it on the Nexus 5X, 6P, and Pixel C. If you want in, head to the Android beta program page.

Android 7.1 includes a few tweaks, although most of what we see on the Pixel is exclusive to that device. Android 7.1 Nougat dev preview still comes with launcher shortcuts, round icons, and image keyboard support. There are also some deeper API changes for developers.

You can enroll your eligible device in the Android beta program to get it on the developer preview or grab the system images here and flash them manually. 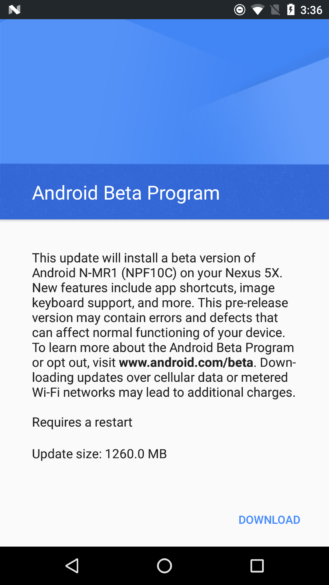 Remember, this is a developer preview. There are likely to be bugs and only a few devices are supported right now. Google says it will expand support to more devices in November.

LeEco's US launch event was confusing, bizarre, and a bit full of itself