Google hasn't been shy about ingratiating itself and its services with the people of India and similarly data-constrained markets – and it should take a bow because some competitors certainly aren't trying very hard to keep up. Last month Google announced a number of initiatives for the Indian market designed to cut down on unnecessary data costs. Among the announcements was a change to the News & Weather app adding a so-called "Lite Mode" that intelligently reduces the amount of text and images that ultimately reaches a phone. Now it looks like the Google app itself will be sporting the same options.

Note: it's worth mentioning that Lite Mode may already be live for users in some areas, but we have no good way to test this. If it is, consider this an early announcement. :p 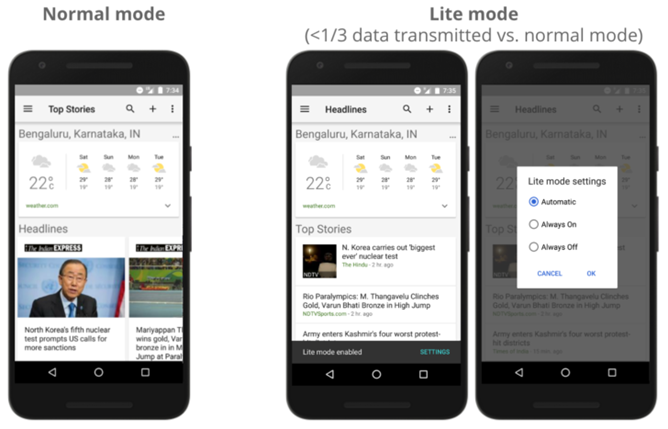 Judging by text in the app, Lite Mode in the Google app will very closely resemble its variant in the News & Weather app. Users have the choice between turning it on or off completely, or it can be set to automatically decide when to kick in. The selector will be in the main list of settings for eligible users.

This isn't a particularly surprising move given the recent announcements, but the impact will be significant. The Google app is home to many of the features that serve fairly strategic purposes, particularly Google Now (or whatever we'll be calling it). Cards filled with news and special information provided by installed apps are quietly loaded in the background. Lite Mode may also affect search results and various other things through the interface. These individual things account for very little data, but they can build up quickly, especially for very active users.

As far as other changes coming with the Google app, the latest update mostly focused on Google assistant interfaces for adding/configuring rooms in a house and setting up the ability to make purchases – things that have been discussed in previous teardowns or Google's own announcements, but weren't fully completed in the public versions of the Google app. As always, there are probably some other little gems hidden in this version, so keep an eye out for other changes.

LG announces the isai Beat, a smaller V20 with water resistance, for Japan