We don't get to see too many updates to the Clock app, but they have a tendency to happen around major OS updates. With Android 7.1 developer previews on the schedule for the very near future, it's the perfect time for the Clock app to make some progress. The latest version can now keep track of timers and stopwatches across reboots and joins many other Google apps with some brand new app shortcuts to run on Android 7.1.

It probably doesn't come up often, but sometimes you're in the middle of something and you've got to restart your device. Maybe there's a system update, or a malfunction, or you're suddenly stricken with a desperate need to try out the reboot button that has been confirmed on the Pixel phones. If you also happen to be using a timer or stopwatch on the Clock app, these tasks will now continue to function even through a reboot.

I've confirmed this works really well with timers, but it seems the stopwatch might be a little less reliable. Both worked fine on my Nexus 6P running Nougat 7.0, but the stopwatch appears to lose time on devices running Marshmallow 6.0 and below.

Thanks to a helpful Telstra subscriber for the screenshot.

Google's apps have been preparing for Android 7.1 with a stream of new round icons and App Shortcuts for weeks. The Clock app already sports a round icon, so the only thing it really needed to add were some shortcuts to round out the feature set. The v4.6 update is no slouch in this department, adding four shortcuts of its own. Unlike previous shortcuts we've seen, these aren't just serving as quick ways to navigate to a specific screen in the app, they actually perform actions. The current options will allow users to create a new alarm, a new timer, start the stopwatch, or activate the screensaver.

It's important to note an implementation detail here. Also unlike previous app shortcuts we've discussed, these are not initialized using an xml file in the app's resources – they are dynamically added at runtime through a newly added API. This means that the shortcuts can only appear on Android 7.1 and above. Third-party launchers will not be able to simulate the shortcuts through any workarounds. It may also mean that the Clock app will have to be run once before the shortcuts can appear; but seeing as it's a system app, that may not be a problem. 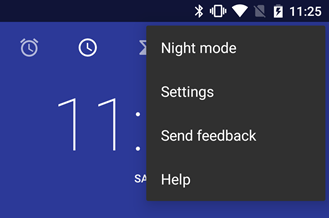 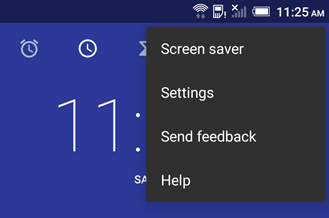 Finally, there are a couple of quick UI changes that we can point out, even though they don't really change very much. First, an option in the overflow menu has been renamed. Night mode is now called Screen saver.

There's also a new icon at the bottom of the "clock" page (the second in the row of pages). It's still red and carries the same general look and behavior, but the grid-like planet has been replaced with one that looks like north and south America.

Google is advertising Allo on its homepage