So today, Verizon has announced that it's finally bringing back unlimited mobile data. But it wouldn't be Verizon without ridiculous anti-consumer restrictions. And boy, do we have them in spades here. You see, Verizon's unlimited PopData isn't a conventional data plan with unlimited use. No, it's a pass that you can buy for a limited amount of time with unlimited data.

Want to stream video or download a big file without worrying about going over your cap? Well no problem, Verizon customer - just pay Big Red two bucks through the carrier app, and you can binge worry-free for all of thirty minutes. If you have something to take care of that's a little bigger, an hour of unlimited access can be yours for the low, low price of $3. It's basically taking a paid airport Wi-Fi model and applying it to your data plan. On your Verizon phone. That you already pay for.

This might actually make sense in a few situations. If you're desperate to get a big file or you need to join a data-heavy video conference, and there's no free Wi-Fi anywhere in the immediate area, two or three bucks doesn't seem like much to pay. And that's why it's evil. Verizon is applying the drip feed in-app purchase model from sleazy mobile games to something that actually matters in the real world. Never mind that the applications you really want a full unlimited connection for, like Netflix or tethered laptop use or online gaming, are things for which you've already paid someone else. 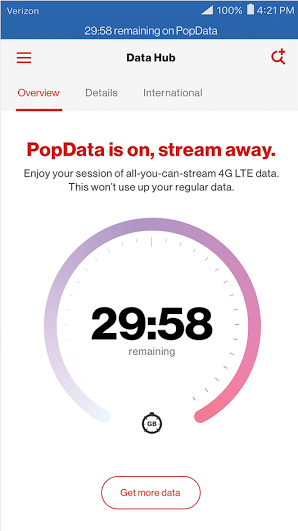 And it's not as if the company is even offering something that they don't already give you - that LTE data connection will be there, accessible and uninterrupted, whether you're paying extra or not. Verizon just wants a little extra money every time you plan to use their network for extended streaming or downloading, the advanced capabilities that have been splattered all over every Verizon commercial for years. It's also pretty obvious that there's no technical limitation preventing Verizon from offering unlimited data in a standard premium plan, without the pretense and nickel-and-dime approach to service that's already being provided.

It's bullshit, pure and simple. Verizon's marketing claims that PopData is a way to "escape the bounds of public Wi-Fi" and "stream at the speed of our 4G LTE network." Those are reasons to use Verizon's much-touted network in the first place, not reasons to charge extra (literally by the minute - as if we were back in 2002!) to customers who are already paying.

More issues with PopData, including limitations covered by the FAQ: 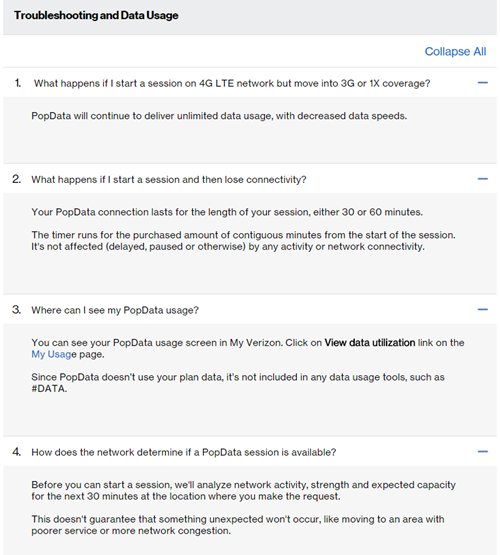 Verizon's marketing is centered on the fact that it's a "premium" network, faster and more reliable than its competitors. That's true, for the most part and in most locations in the US. But a premium network wouldn't cynically withhold unlimited data and try to convince us that we don't need it, only to try and sell it back to us a half-hour at a time for even more money. A premium network wouldn't treat its customers like carnival patrons, insisting on a few dollars a go for the real deal. A premium network wouldn't spend years lording its superiority over its competitors, then try to swindle its paying customers into paying even more for what it claims it can't provide. 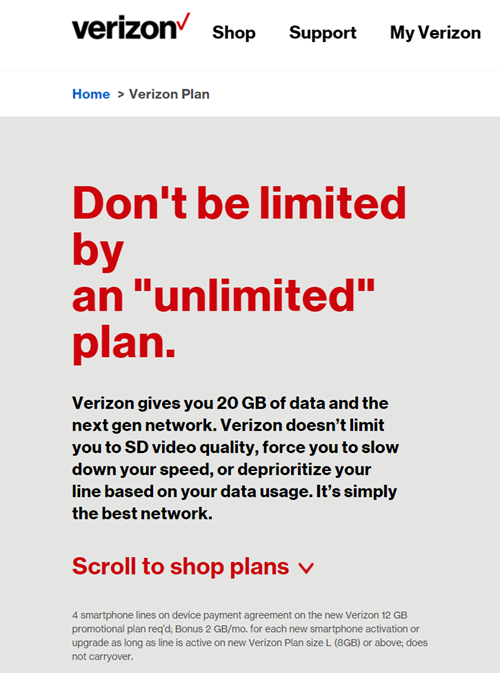 Verizon's Plans page on why unlimited data sucks... unless you buy it in tiny chunks, I suppose.

My grandfather used to say, "don't piss on my boots and tell me it's raining." If I was a Verizon customer, told for years that I couldn't pay for unlimited data and that unlimited plans from other carriers weren't worth the bother, my toes would feel pretty damp right now.

Google's smartwatches may arrive in Q1 2017, will run Android Wear 2.0