An update to Google Photos began rolling out yesterday, and alongside it came a promising blog post about new assistant cards highlighting memories and suggesting rotations for sideways photos. Regular users may recognize that some of these aren't totally new, at least not with this version. However, there are some under-the-hood changes that speak to some interesting things for the future. A teardown shows that the video play may be getting an overhaul and Photos might soon auto-generate time-lapse videos for us. 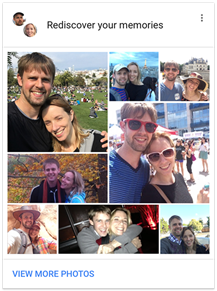 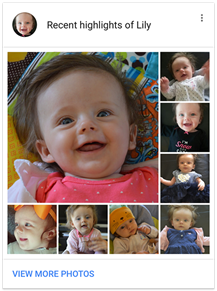 Take a peek at the assistant stream in Photos – or watch your notifications if you haven't turned them off already – and you might start to see a few new cards turning up. Photos has three relatively new types to join the list. There's a Rediscover your memories card that will bring back an assortment of shots from various points in the past. It sounds a little like the Rediscover this day card that has a tendency to select the worst possible days (#IHadABadExperience), but this one appears to be more focused on photos with common elements. The given example shows what appears to be a couple at various locations around the world.

The second card shows Recent highlights taken from the last month. These are probably going to appear fairly regularly and act as a good reminder to do something with the pictures you've taken.

The last of the three is a spin-off from the short animations generated from a series of photos. Instead of starting from individual pictures, this generates short animations cut from longer videos. It's certainly reminiscent of Apple's Live Photos feature, but with less reliance on good timing – and this didn't need a stage presentation. 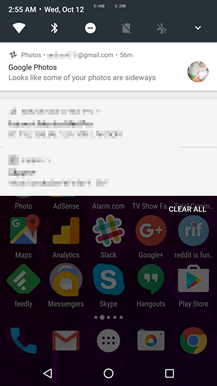 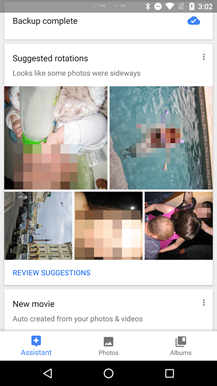 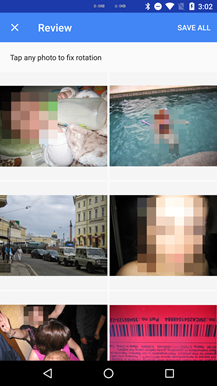 Rotation suggestions were added in v2.1, but judging from some reports, it seems the actual suggestions weren't showing up until just a few days ago. There's not much to say that our previous post didn't already hit, so feel free to enjoy the slightly mesmerizing animation and then jump down to the teardown below.

Time-lapse photography has been on the rise lately. High-speed time transitions are extremely useful for many types of videos and even the odd GIF. They can be used as B-roll to cut between two scenes, to speed up a tutorial that takes many steps, or stand entirely on their own. It looks like the Photos app is preparing some kind of feature involving time-lapses, though the specifics aren't readily available yet.

Now the real question is how exactly this will work, or rather, what it will create. There are different types of videos people will call a time-lapse. The conventional, or at least currently accepted definition calls for taking pictures of a set area with a regular delay between each shot, then turning each shot into a video frame. In theory, the Photos app (or servers) will take on the responsibility of stitching together the frames. However, this seems unlikely since it requires leaving a phone in one place for a long period of time while it fires off shots. Let's be honest, that really doesn't sound like something Google is likely to encourage.

Reaching out to other types, Photos may convert regular speed videos into time-lapses by removing frames. It's a common way to speed up playback and create the time-lapse effect, but usually not at the same quality. Yet another version, albeit a loose definition of the term, Photos may create time-lapses by starting with a picture of somebody at one point in time, then transition or morph through an assortment of still photos. Frankly, I expect this is probably what we'll get.

It's fair to say that the video player in Google Photos could use some improvements. It's not bad, but it's not particularly powerful or elegant. Now it looks like something is being done about it. New code and resources have been added that show the Photos app will begin using the open source project ExoPlayer to handle video.

Again, there is no text for this one, but there are some images for player controls with the prefix "exo_controls_" and some new layouts named exo_playback_control_view and exo_simple_player_view. Some ExoPlayer code has also been added.

Why does this matter? To put it simply, ExoPlayer is a pretty robust library for media playback, but it's also very customizable. The Photos team will have an easier codebase to work with, which means features and improvements will likely happen more quickly than with the current player. There will also be more room to make improvements so the player is more enjoyable to use.

Verizon's 'unlimited' PopData scheme is all kinds of bullshit