A pair of fresh updates of the Play Movies & TV app rolled out to both Android TV and regular devices yesterday. Like many other recent updates, there's not a lot of new functionality to see on the surface, particularly for the Android TV version. Phones and tablets gained a new toggle to control notifications about expiring rewards, but that's about it. However, a teardown shows a few improvements scheduled for future updates, including 4K support, a special channel for watching trailers, and recommendations for similar TV shows. Read on for details or skip to the bottom for download links. 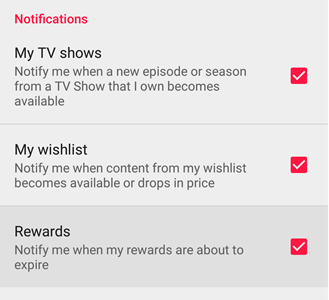 We all like to get things a little cheaper (or free), so it's only natural that we'd like a chance to snap up an opportunity if it's about to pass us by. How would you like a reminder when such offers are about to expire? The latest update to Play Movies & TV appears to bring exactly that. There's a new toggle in the Settings screen titled "Rewards" that offers to notify you when a reward is about to expire. It's on by default, so you don't have to worry about turning it on.

I'm not sure about anybody else, but I know I forgot to use plenty of free rental credits from various Chromecast offers. Maybe this will make it a bit easier to keep track of things like that.

If it wasn't already completely obvious after the Chromecast Ultra announcement on October 4th, Google is pushing deeper into offering 4K content to customers. YouTube already supports 4K and has a moderately large library of content, but it's really the Movies & TV service that needs to meet this demand. The latest updates add text that clarifies when 4K video is available and the labels for Buy and Rent buttons.

As per the announcement, 4K content won't launch on Play Movies & TV until November when the Chromecast Ultra is set to begin shipping, so it's no surprise that it's not mentioned anywhere on the web interface, phone & tablet app, or even on Android TV units that actually do support 4K like the nVidia SHIELD. Google will probably make an official announcement when the time comes, so just keep watching and it will happen soon enough.

A common element in the movie-going experience is to watch trailers for other movies before beginning the film you've paid to see. This is possibly one of the best forms of discovery in any industry because many people actually want to see the trailers. Even though they are effectively just commercials, they're often interesting and very entertaining.

With the rise of on-demand video, customers tend to frown upon being forced to watch trailers before getting to a movie. The trailers are still usually available with movie listings, but that requires proactively looking through movies and picking each one you want to watch. If you'd like a more hands-off approach that can play all the trailers you can handle, Play Movies & TV is getting ready to give you a channel for just that purpose.

There really isn't enough to look at to get any more specific details at this time, but the concept is pretty obvious – trailers will play for as long as you've got the patience to sit through them. It's not clear if the trailers will be chosen based on your tastes, but it's a pretty safe bet that it'll be possible to skip any that aren't of interest. At this time, there's no clear evidence that it will be possible to go straight from a trailer to purchasing and watching its full length movie, but that's certainly a flow I would expect to be available when this feature launches.

The trailer channel probably won't launch for a little while. The setting to enable it is in a preference screen that's hidden for all but authorized testers, and the feature itself is still considered experimental. As such, it's probably not going to be ready until there's at least one more update release, and may not appear for a while.

While we're on the subject of discovery mechanisms, another really common one is also on the schedule, but this time it's for television shows. Of course I'm talking about a list of similar TV shows.

Frankly, this is such a common feature throughout the Play Store and other apps, I was genuinely surprised to open up Play Movies & TV only to realize it actually wasn't there. In fact, the Play Store doesn't have a list of similar shows either. Similar movies, yes, but not similar shows. This will be changing at some point in the future, possibly without an app update. Keep watching for a list to appear in the details screen of your favorite series.