News apps are all the rage at the moment - just a few days ago we reported on News Pro from Microsoft, and Flipboard just topped 500 million downloads on the Play Store. Yahoo's been quite big on the news before, so today it's launching an update to Yahoo Newsroom to introduce some new features that curate the news to what you want to read.

The key new thing here is "Vibes." As you select what news interests you, the app will learn over time and better surface content that is more likely to get read. Let's face it: most of us, when reading the news, skip past most stuff and click on anything interesting. What Yahoo is trying to do here is make all the news you see "interesting," but only for you. The person sitting next to you on the subway or on the bus will have a completely different feed of news. Many companies have tried this and while I've found it somewhat works, I still tend to scroll past at least 50% of what I see. 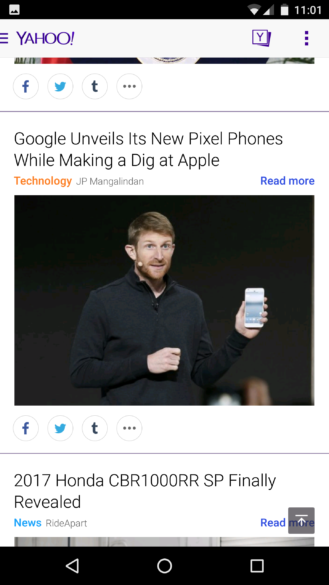 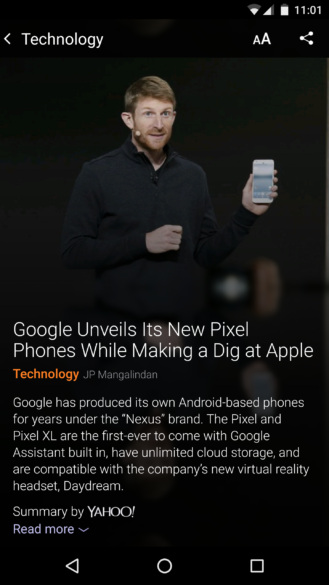 Vibes also has a social element. Users can post news directly into specific vibes (say, U.S. news) and attach a comment or reaction to it. Other users can then start commenting on the article, allowing a conversation to start. Yahoo says that the cycle goes something like this, "read, watch, react and repeat." If it can get more people engaging in the news articles, it seems like that's the path to success.

It remains to be seen whether this will help Yahoo find its footing again. The company has just been sold to Verizon, which also owns another former internet giant, AOL, so let's hope Yahoo can get back on the right track and not fall further into the abyss. Newsroom is available on Google Play, but it appears that it is limited to the United States at the moment.

[Update: Live] Best Buy will give you a $100 gift card and a Chromecast when you pre-order and ...