Like the Nexus 6, the Nexus 9 LTE didn't receive Nougat when most other Google devices did; however, since the Nexus 9 LTE sold significantly fewer units than the Nexus 6, there wasn't much outcry. Not too long after that, Google told us that updates for both devices would be arriving "in the coming weeks." Two days ago, the Nexus 6 finally got the update to Android 7.0 Nougat, and now, the LTE-equipped Nexus 9 is also receiving it. 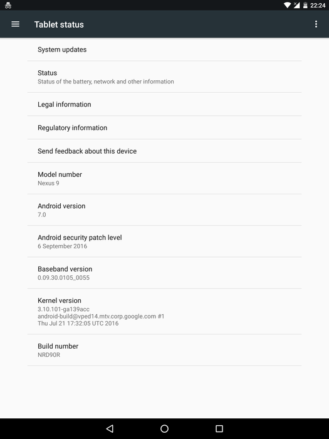 Although Nexus 9 LTE tablets that are enrolled in the Android N Beta Program received this update almost three weeks ago, it's finally hitting those that are still on stock 6.0.1. Neither the factory image nor the OTA image is available from Google, and we're not sure when they'll be made available. Oddly, the Nougat update for the Nexus 6 sported the October 5th security patch, while the N9 LTE's only contains the September 6th patch.

The update will bring your build number to NRD90R, which appears to be the same build that beta testers were receiving a few weeks back. Google's OTA image download page has been updated with this build, but the factory image isn't available yet. We'll let you know when it goes live.

The factory image is now available.

The unlocked Moto Z is now available for $699.99 from Motorola, Amazon, and B&H