Yesterday was a frenzy-filled day, what with the new Pixel phones, Google Home, and more being announced; however, not every day can be as exciting. Today, Google's Opinion Rewards application for Android has been updated with a new icon, a blue color scheme, and a new notification icon. Fun stuff.

As you can probably tell, the new icon is circular. This corroborates the article that Cody whipped up about Google's impending "circlification" of its icons, which has already begun with the launch of the Pixel phones yesterday. Additionally, the icon is now a trophy; this, compared with the bar graph (I think?) of the previous icon makes a lot more sense for an app called "Rewards". 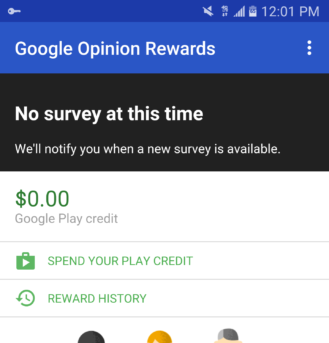 To go along with the new blue icon, the toolbar has been switched to blue. Other than these minor cosmetic modifications, and a new notification icon that reflects the new icon's design, there doesn't appear to be any major changes under the hood.

The new version currently isn't available on the Play Store for everyone yet, but you can grab the APK from APKMirror here.

Carmageddon goes free on the Play Store, brings ads and bugs with its latest update