Google unveiled the Mi Box with Android TV way back in May at Google I/O. Then for months, nothing. We were starting to wonder if the device would ever come out when it began appearing on Walmart shelves last month. Now, the Mi Box is official. It's going on sale today on Mi.com and at Walmart for $69.

The Mi Box is one of only a few Android TV boxes that have been released. Google's original Nexus TV was a flop, and the Razer Forge TV never even got support for Netflix (which is absolutely insane). The NVIDIA Shield has been the only Android TV box worth having, but it's $200. The Mi Box includes many of the features of the SHIELD for a lot less cash. 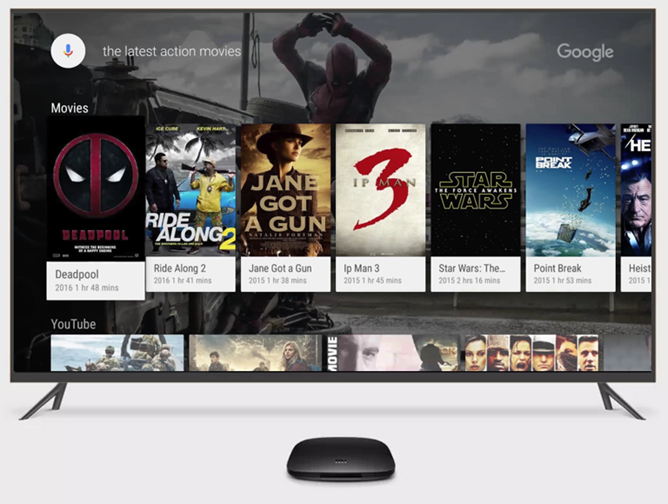 Xiaomi's box supports 60fps 4K video, HDR, and DTS/Dolby surround sound. The Mi Box is light on storage at 8GB, but it can be expanded. The box also comes with a voice-activated Bluetooth remote. Oh, and it has Netflix out of the box. If you buy the Mi Box, you'll get a few special deals that have an estimated value of more than the box itself. There's a $50 Sling TV credit, 3 months of Pandora, and a $5 credit on Vudu. We aren't seeing the purchase link just yet, but it shouldn't be long.

NEW YORK CITY, 3 October 2016 — Leading consumer technology company Xiaomi announced today that it is bringing Mi Box — its 4K Ultra HD streaming media player powered by Google’s Android TV — to the U.S. market for $69. Mi Box will be available on Mi.com starting today at 12 p.m. ET, and in Walmart stores as well as Walmart.com in early October. With Xiaomi’s commitment to bringing innovation to everyone, the $69 price tag of Mi Box is set to disrupt the U.S. market for products that deliver a richer television experience. Mi Box offers 4K support at 60 frames per second, support for the latest HDR10 standard, Google voice search and Google Cast.
Thanks to Android TV, Mi Box comes with thousands of movies and shows from popular streaming apps including Netflix, HBO, Showtime and VUDU, as well as games from Google Play. As live streaming TV grows in popularity among U.S. consumers, Mi Box is also offering users easy access to live TV channels including ESPN, CNN and Disney without a cable subscription through Sling TV.
Hugo Barra, Vice President, Xiaomi Global said: “We are thrilled to bring Mi Box to our fans in the U.S. in collaboration with Google. This is a significant milestone for Xiaomi, as it is our first opportunity to demonstrate to consumers here in America the power of what makes Xiaomi extraordinary: our promise of innovation for everyone. We believe everyone is entitled to benefit from technological breakthroughs, and Mi Box is a reflection of that belief: an incredible entertainment experience at an unprecedented price of $69, less than the cost of a single night out for two.”
Sascha Prueter, Google’s head of Android TV, said: "The Android TV team is excited to partner with Xiaomi to deliver the Mi Box to the U.S. With features like voice search and HDR support, the Mi Box takes advantage of the latest Android TV platform innovations."
Smooth video playback in 4K Ultra HD and HDR
Mi Box supports 4K Ultra HD video content playback at 60 frames per second, for the sharpest image quality and smoothest video playback. In addition, Mi Box supports the latest HDR10 standard (to be enabled from Android N onwards), which promises improvements in color and contrast for a significant leap in picture quality when used with compatible TVs.
Mi Box supports Microsoft’s hardware-based DRM technology PlayReady 3.0, which protects 4K and HDR content and enables a rich viewing experience for 4K Ultra HD video content.
Equipped with a quad-core ARM Cortex-A53 CPU and Mali 450 GPU, as well as 2GB DDR3 RAM and 8GB eMMC flash, Mi Box provides powerful performance for a smooth streaming and gaming experience. Users can also add additional storage to Mi Box via USB.
Mi Box also delivers rich and vibrant audio with Dolby Digital Plus and DTS Surround Sound, creating a cinema-like experience right within the living room.
Mi Box offers an exciting range of content from live TV, Netflix, YouTube and more
Mi Box arrives in the U.S. on the heels of Xiaomi’s success in the TV market in China, where it has already sold over 15 million smart TVs and set-top boxes since 2013. In the U.S., Mi Box is also set to shake up the home entertainment market, as several major content companies have joined Xiaomi to make their content available to a massive new audience.
Thanks to Android TV, Mi Box comes with a rich library of content with thousands of movies, shows and games from Google Play, YouTube and other apps. Users have no lack of entertainment options with pre-installed popular streaming apps including Netflix, Pandora, VUDU, Pluto TV and Red Bull TV. Images come to life on TV screens when viewing the wide range of 4K content available from YouTube, Netflix and others.
Live streaming TV is poised to explode as a new generation brings its viewing habits into the living room, and Mi Box brings the best available experience for viewing live TV channels including ESPN, CNN and Disney — all without a cable subscription.
Special perks (total of $76 value) offered by content partners include:
Roger Lynch, CEO, Sling TV, said: “Since its founding, Xiaomi has been a disruptor overseas, and we expect the launch of Mi Box in the U.S. to be no different. Our goal has always been to expand Sling TV to the most popular consumer devices, and we believe Mi Box’s revolutionary technology and accessible price point paired with the Sling TV experience will be a winning combination among American consumers.”
Google Cast and Google voice search
Mi Box also has built-in Google Cast technology that lets users easily share their small screens, casting TV shows, movies, music and games from their mobile device to the big screen with just a single tap.
Mi Box comes with a Bluetooth remote control that supports voice search and commands. Users can simply speak into the remote to search for content by description — try “Leonardo Dicaprio’s Oscar movie” to find exactly the right movie, or ask “who played Aragorn in Lord of the Rings” for search results. Users can also change channels, go directly to a TV show or movie, do Web searches, and launch apps by just speaking into the remote. The Bluetooth remote can also be used as a controller for the huge catalog of games available for Android TV.

Google is rolling out October security patches, still no Nougat for the Nexus 6 [Update: Nexus ...