The Text-to-speech app doesn't see many major updates throughout the year, but when it does, there's often something interesting to see. Version 3.10 began rolling out yesterday and it comes bearing a pair of new settings to intelligently alter volume based on existing audio playback and to control the intonation of synthesized voices. As always, we've got a link below to grab the latest apk if you aren't among the first to get it straight from Google. 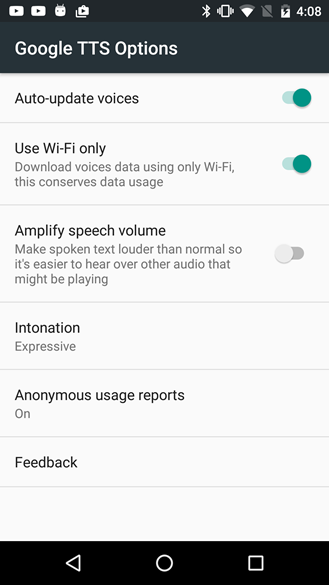 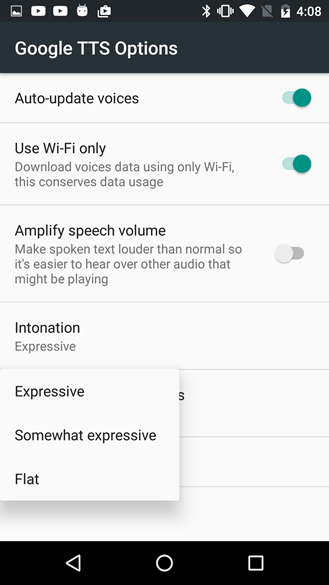 The new settings are named Amplify speech volume and Intonation. The first will tell the text-to-speech app to detect the volume of any audio playing currently playing on a device and elevate its own volume to be louder. The point of this feature is to make it easier to hear audio prompts and responses over any other sound effects and music.

The second setting, Intonation, modifies the degree of emphasis and personality used in the generated voices. It's a dropdown list with the options: expressive, somewhat expressive, and flat. The default setting is already at expressive. I've tried changing the setting and it's certainly striking to hear anything other than the fully expressive level. The flat level is so entirely robotic and lifeless that it becomes a bit unnerving. I'm not sure if anybody will want to change this setting, but it is there if you're interested. 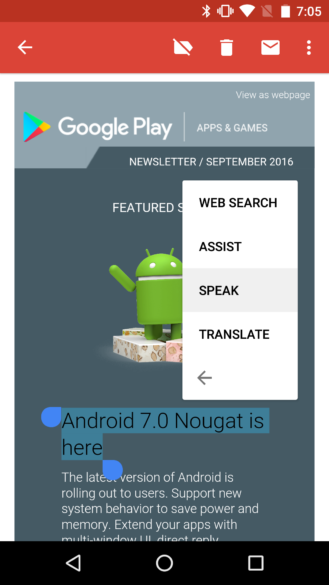 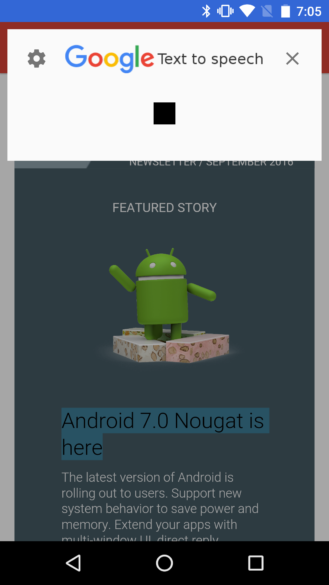 Another new feature was pointed out by misphit_917, and it's probably the most requested feature TTS has ever had. After selecting some text, the pop-up shows options like Copy, Share, Select all, or others. There's also an overflow button that reveals additional options like the Translate feature added shortly after the launch of Marshmallow. Text-to-speech v3.10 adds a new item to the list titled Speak, and as you might expect, it reads aloud the selected text.

Selecting the Speak command opens an overlay at the top of the screen with a play/pause button, allowing the playback to be cancelled or replayed. A gear icon acts as a shortcut to the TTS settings screen, and there's also an 'X' at the top right to close the window, although tapping anywhere outside of the window will also close it.

Since the extensible system-wide menu for text selection is a new feature in Android 6.0 Marshmallow, it's fairly obvious this new feature (at least in this form) isn't available to devices running Lollipop and below.