Even if you're a regular gamer, you might not know about Ketchapp. The publisher is only a couple of years old, and the games it posts to the Play Store and App Store are uniformly small, simple titles. But what it lacks in ambition it makes up for in volume: by my count there are no less than 75 Ketchapp games on the Play Store, an impressive accomplishment in a short amount of time. Ketchapp seems to have caught the eye of some industry heavy-hitters, because it's being acquired by Ubisoft, one of the biggest game publishers on the planet.

Ubisoft didn't disclose the terms of its acquisition, and it still needs to clear regulatory hurdles, but that shouldn't be overly difficult. The aim is clear from the press release, which claims that the French company is now "the fourth-biggest mobile game publisher in terms of downloads." Ketchapp's take-all policy, which openly courts tiny independent developers for publishing, probably has something to do with that. The company will consider applications from just about anyone, no matter how small or simple their game is, and publish qualifying titles for free with a bit of monetization (usually in the form of an ad-free upgrade). Android Police's own game roundups usually feature at least one or two games published by Ketchapp, though the latest titles have been including a bit too much currency-based IAP to justify for one-button casual games. 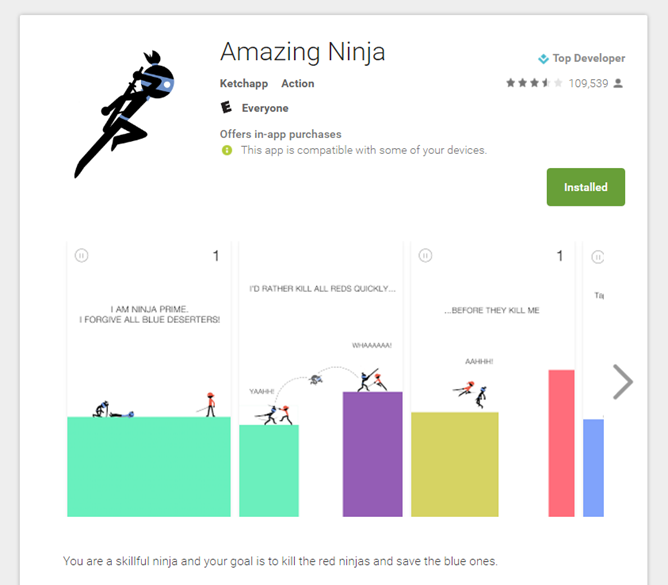 Ubisoft publishes its own mobile titles, most notably spin-offs of its gigantic console franchises like Assassin's Creed, Just Dance, and Rayman. It has cultivated a few mobile titles like the Hungry Shark series and a game about an ancient evil demigoddess and her murderous horses, but a gigantic publisher like that isn't really nimble enough to deal with a one-person development team that just wants to get its casual game on the market.

Which brings up an interesting point: some of those tiny developers now have products that are owned and distributed by a company with revenue in the billions. When a big company like Ubisoft or EA buys its way into mobile development, it usually means that they take tried-and-true formulas and try to slap $100 in-app purchases on top of them. That might not work for games like Ninja Jump and Stack, which are so simple that trying to add on a complex currency system would break them. It will be interesting to see the fallout from this potential clash of gaming cultures.

It's also worth noting that Ubisoft itself is desperately trying to stay independent. French media juggernaut Vivendi is reportedly trying to take over the company - it did the same to Gameloft earlier this year.

Paris, 27 September 2016 - Today, Ubisoft announced it has acquired Ketchapp to join its international network of studios. With this addition, Ubisoft expands its footprint in digital and mobile gaming and becomes the fourth largest mobile game publisher when measured by number of downloads.

As a publisher of free-to-play games for mobile and tablets, Ketchapp has released many titles that became immediate successes, such as 2048, ZigZag, Stack, Stick Hero, Twist, and Jelly Jump. Ketchapp focuses on creating fun and accessible gameplay experiences, and on the animation of a collective community of millions of players. Since its creation in 2014, Ketchapp games have been downloaded nearly 700 million times, an average of more than 23 million downloads per month[2]. The company also is recognized for having expertise in mobile advertising and cross-promotion.

"With Ketchapp, Ubisoft acquires a highly profitable publisher with a successful portfolio of free-to-play games for mobile," declared Jean-Michel Detoc, executive director of Ubisoft's mobile business. "This acquisition gives Ubisoft one of the world's leading mobile game publishers and reinforces our advertising capabilities in mobile gaming."
"We are thrilled to become part of Ubisoft's international network of talented teams," said Antoine and Michel Morcos
, managing directors and co-founders of Ketchapp. "We founded Ketchapp with the intention of creating captivating gaming experiences, and we are looking forward to leveraging Ubisoft's creativity and resources to enrich our existing and upcoming titles."

The acquisition is subject to customary closing conditions and is expected to close in Ubisoft's 2016-17 third quarter.