As a kinda, sorta well-known technology journalist, I get a lot of pitches for hardware to review. More often than not, I just ignore these emails (sorry PR people) because I simply get too many of them. On occasion, someone pitches an interesting thing, and I'll take a closer look at it. Such was the case with the Grace Digital CastDock X2. I thought at first it was a Cast enabled speaker, and I bet that's what you thought just now too. Well, it's not. This is literally a dock for your Chromecast Audio, and that makes it just weird enough to warrant a quick hands-on here.

The CastDock looks like any number of other home speakers you can buy. It's a roughly 8-inch tall rectangle with a speaker grille that wraps all the way around the back. On the rear are power, AUX in, and a speaker balance switch. Things get weird when you move to the top.

There's a "G" plate that attaches with magnets (I'm sure it's supposed to be for Grace Digital, but it looks kind of like the Google G). Pull that off, and there's a Chromecast Audio-sized hole in the top of the speaker. No, it does not come with a Chromecast Audio. You have to supply your own. However, the dongle does fit in there quite snugly. There's a USB cable and optical line that integrates the Chromecast with the speaker. 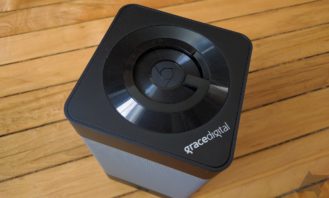 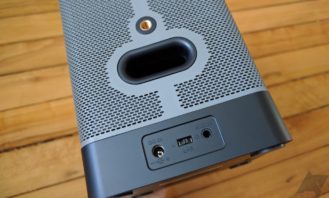 Okay, so that's kind of odd. What you're left with is a WiFi speaker, but that's all that it is. The CastDock doesn't have any other wireless streaming fallback for audio. I was surprised it didn't have Bluetooth as well, but I suppose the company decided to focus entirely on the Cast-enabled speaker market. It kind of makes sense in a way—the prices for speakers with Cast built-in are out of control, but Bluetooth is super-cheap.

When you plug in the speaker with your Chromecast Audio installed, you'll have to set it up on your WiFi network just like any other Chromecast device. That's also how it will show up in your Google Cast menu; as a Chromecast Audio. All the controls are on your phone or other device, save for the mute button on the front of the CastDock.

So, what are you gaining from this device compared to using a Chromecast Audio in the traditional way? Well, it looks much cleaner, and it's easier to move the speaker around. Although, it doesn't have a battery, so it needs an outlet (and WiFi obviously). Having the CC Audio dangling from the back of a speaker is a bit of a nuisance. With the CastDock X2, it's all inside and it looks rather neat.

As for the audio quality, it's quite nice. Audiophiles will tell you that the optical connection used by the CastDock is better than a traditional 3.5mm jack. I can't speak to that personally, but the sound is certainly good enough. Inside is a 50W amp. Again, I'm not an audiophile, but I was struck by how big the sound was the instant I started using this speaker. It gets almost uncomfortably loud in my small office. The sound doesn't distort even at high volumes, and the bass is good for such a small speaker. It might even be a little too bassy for some people. If I had to find fault, I'd say the highs are slightly on the tinny side. 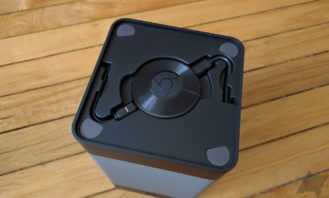 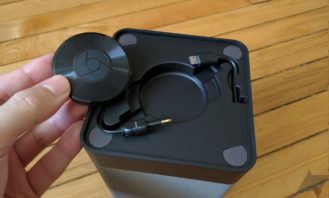 Because it's a Chromecast Audio doing all the heavy lifting, you get the usual benefits from that. You can start audio playing then turn your phone off or leave the area and it'll keep going. You also won't hear notification sounds coming through the speakers like you will if you use Bluetooth audio.

If this product were $50, I think it'd be an easy sell. However, it's currently listed on Amazon for twice that. At $100 (plus the cost of a Chromecast Audio if you don't have one), you can get something like a JBL Flip 3 Bluetooth speaker that sounds just as good and can go with you. Still, when you compare this to speakers with Cast built-in, the CastDock X2 is much cheaper. Most alternatives are several hundred dollars at least.

I think there's a use case for this speaker, although it's a narrow one. If you want a reasonably nice speaker with Cast built-in, but you don't want that awkward Chromecast Audio and power cable dangling out of the back, the CastDock X2 is your friend. If that doesn't sound like something you want, this is a pass.