We first heard about the newest additions to the ZenFone lineup back in late May, but ASUS didn't elaborate on availability for the United States. The ASUS ZenFone 3 Deluxe and ZenFone 3 Laser are now available to buy on Amazon for $530.48 and $206.95, respectively. However, they still won't ship for at least two weeks (if Amazon's information is correct).

It's been a while since these phones officially launched, so let's recap their specs. The ZenFone 3 Deluxe is the top-of-the-line model; for the US, it sports a 5.7-inch 1080p AMOLED display,  (update: seems to be the 820, as the 821 variant includes 256GB of internal storage), a whopping 6GB of RAM, 64GB of microSD-expandable storage, a 23MP camera, and a solid 1-year US warranty with accidental damage protection. It's listed for $530.48. 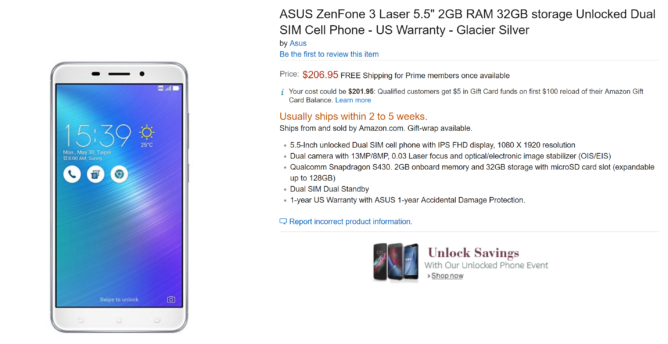 Both devices have metal bodies, fingerprint sensors, and dual SIM capabilities. There doesn't appear to be a listing for the standard Snapdragon 625-equipped ZenFone 3; it's possible that ASUS isn't planning on selling that model in America.

If you're interested, you can head on over to the source links to check them out. Both devices will be shipped and sold by Amazon.com with Prime shipping, so you won't have to deal with third-party sellers.

The listings appear to have been pulled; we're unsure exactly why, but it's likely because they were published too early.